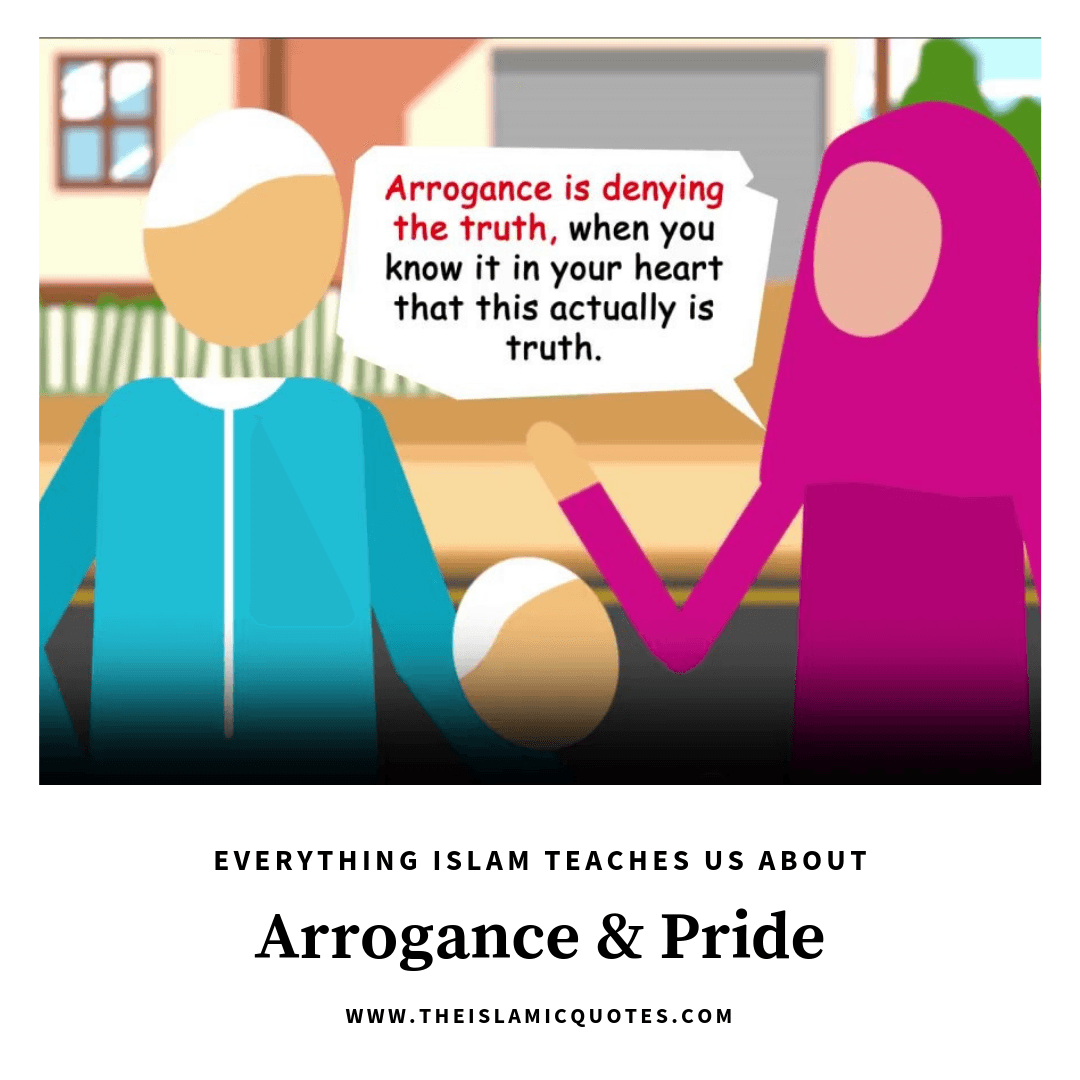 Quotes about arrogance and pride in Islam. Arrogance is to think low of others and consider oneself above them. Arrogance corrupts a person’s soul and his heart. It damages relationships and leaves a person empty-handed.

In Islam, arrogance is a sin and makes Allah unhappy. There’s severe punishment in Islam for this sin as pride and honor belong to Allah SWT only and human beings are nothing but his creatures and are helpless in front of Him.

Arrogance is that feeling which corrupts hearts and souls. When a person feels superior to others, he thinks of himself above everyone else. Nothing and no one can compete to his standards as he’s always considering himself, his choices and opinions over everything.

In Islam, an arrogant person who keeps himself superior to others deserves severe punishment by Allah SWT. 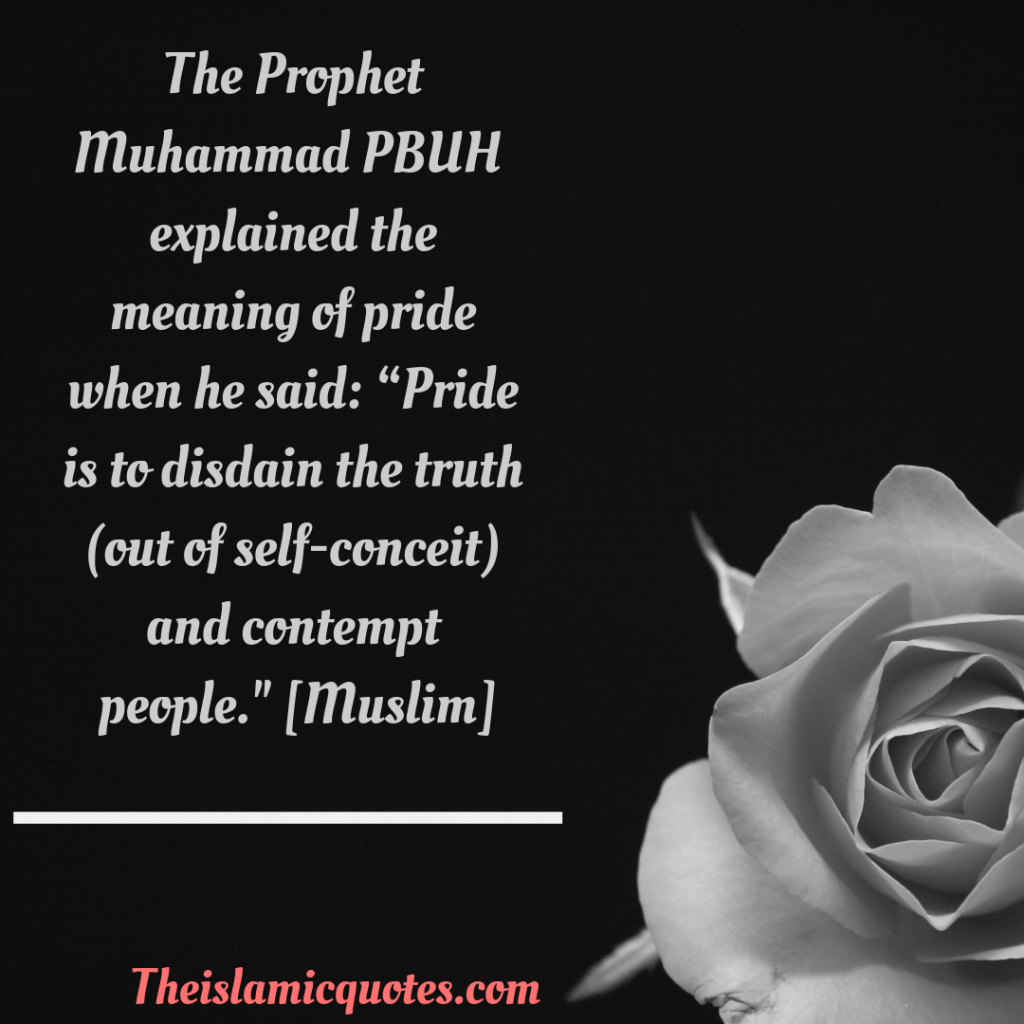 Islam is the religion of peace and love. There’s no place for negative feelings like violence, hatred, pride, and arrogance. In Islam, an arrogant person, as long he considers himself superior, is on the path of making Allah SWT angry.

Arrogance is one of the great sins in Islam, as this religion teaches equality and humility. No one has superiority over anyone be it casts, religion, sect, etc. Allah Himself in the Quran has described hell as the punishment of an arrogant person. 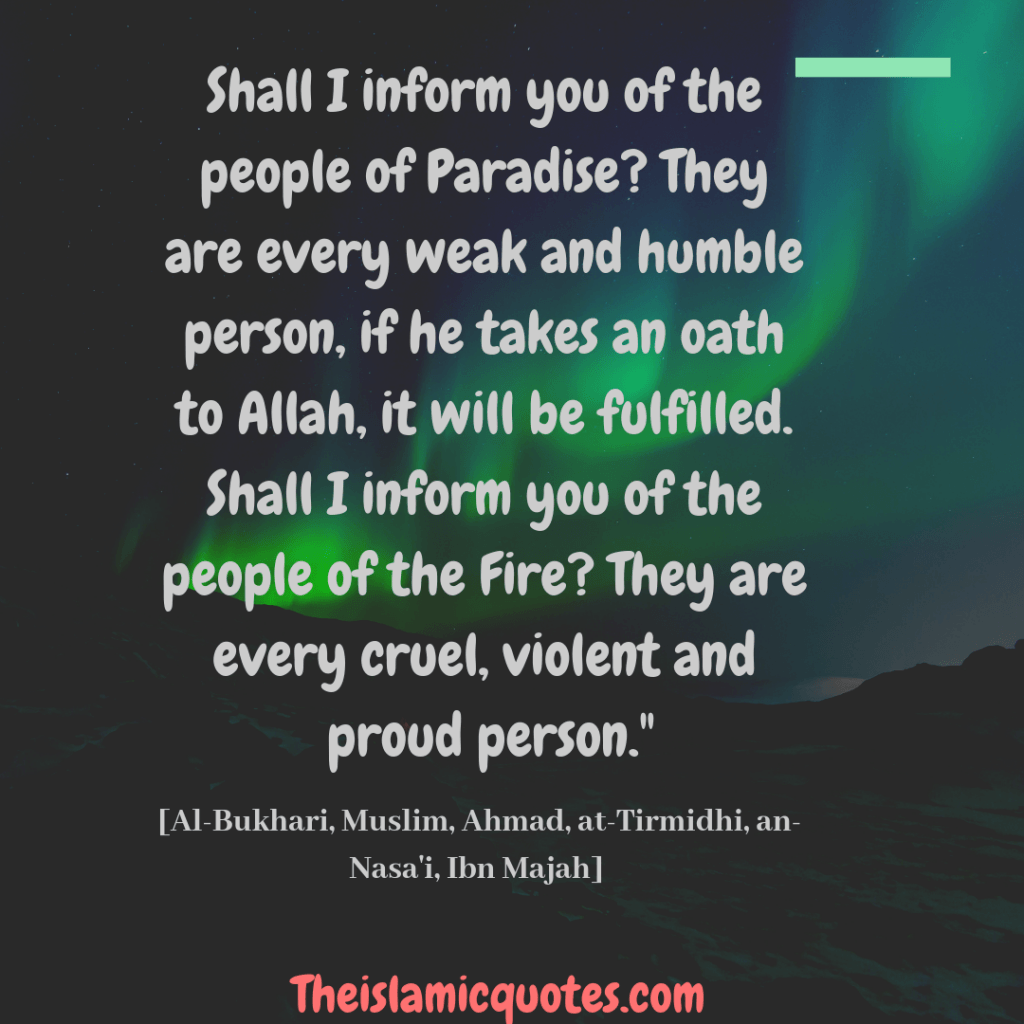 Even if you observe a person as being un-religious, do not treat them badly or think of them as beneath you. A concept that has been beautifully explained by Nouman Ali Khan. For some more amazing quotes from him, here are 35 Inspirational Islamic Quotes & Sayings By Nouman Ali Khan.

Arrogance corrupts the hearts and souls of a person, it also corrupts his Emaan. A person who doesn’t take Allah’s commands into account and doesn’t follow the right path due to pride and becomes proud towards Him, Allah Himself puts a seal in their hearts. They do not understand His words, they don’t follow Islam and don’t believe the oneness of Allah neither they care about the hereafter. They don’t imply their success to Allah’s blessings, but only to their capabilities. They don’t try to look past their arrogance and follow Allah’s commands 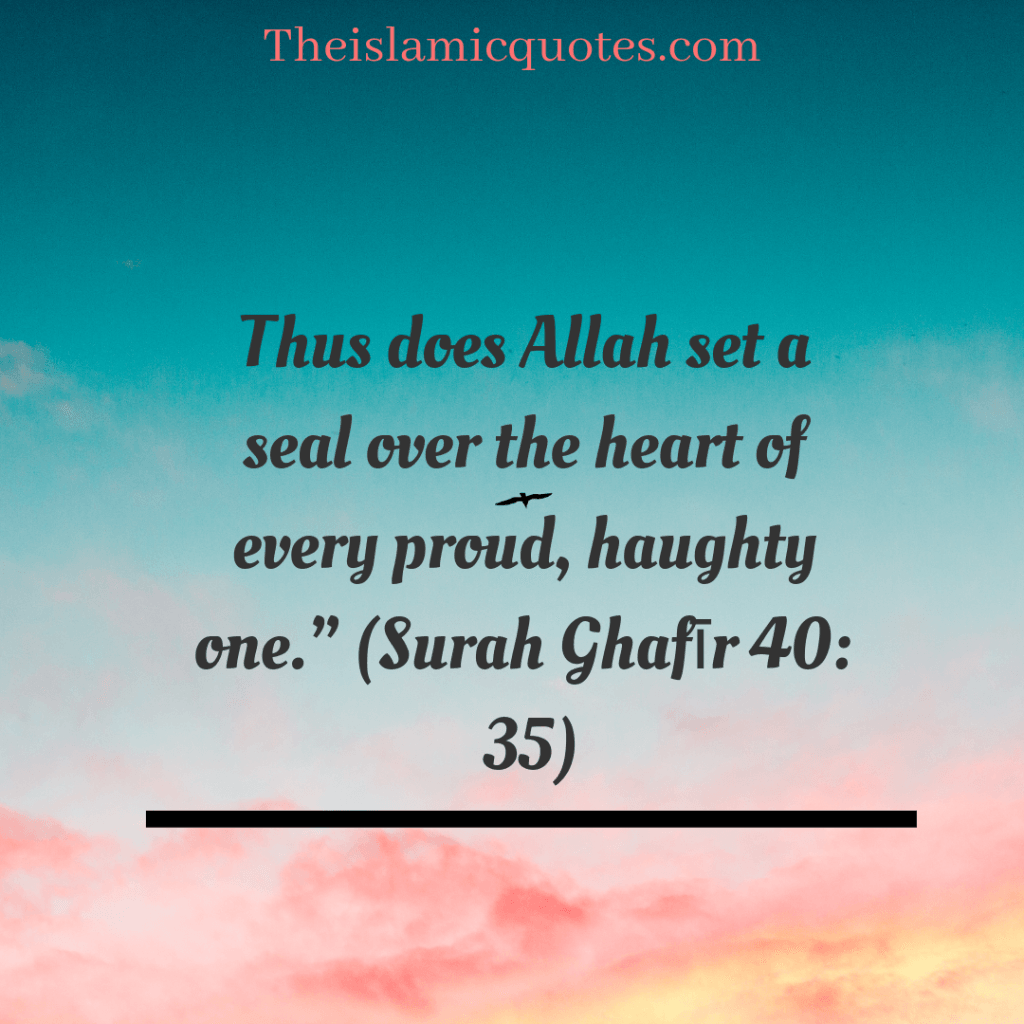 Allah has sent prophets to every nation for their guidance. They had come to people with Allah’s words and teachings in their hands. To act ignorantly towards such divine personalities or consider oneself above them is the arrogance of the highest kind.  In the past, many people like fi’raun had shunned the Prophets of Allah SWT and did not care about the word of Allah. Similarly, Prophet Muhammad PBUH had faced many obstacles and tried to teach those who would always mock him with their arrogance. This arrogance shows the weakness of Iman. Those who neglect the teachings of the prophets or abandon them, they just don’t go against the prophets but also against Allah. 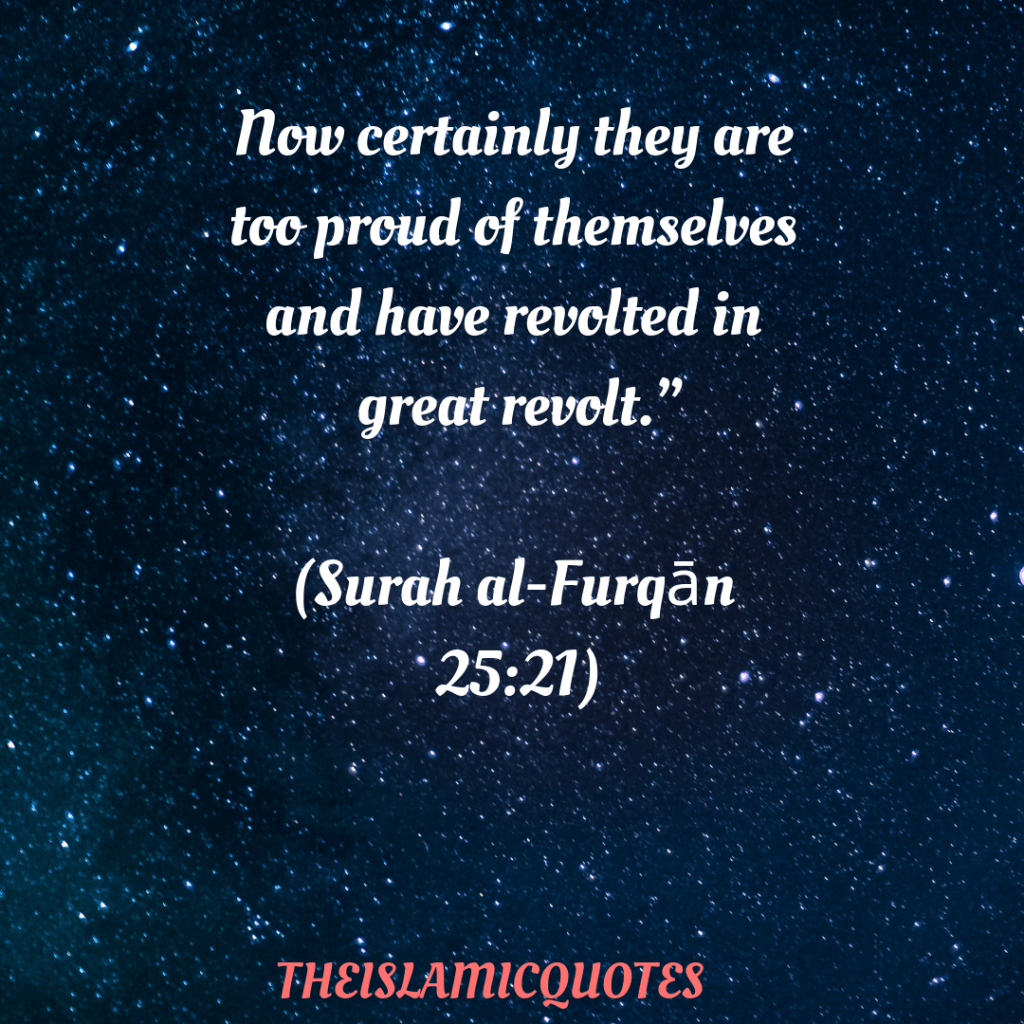 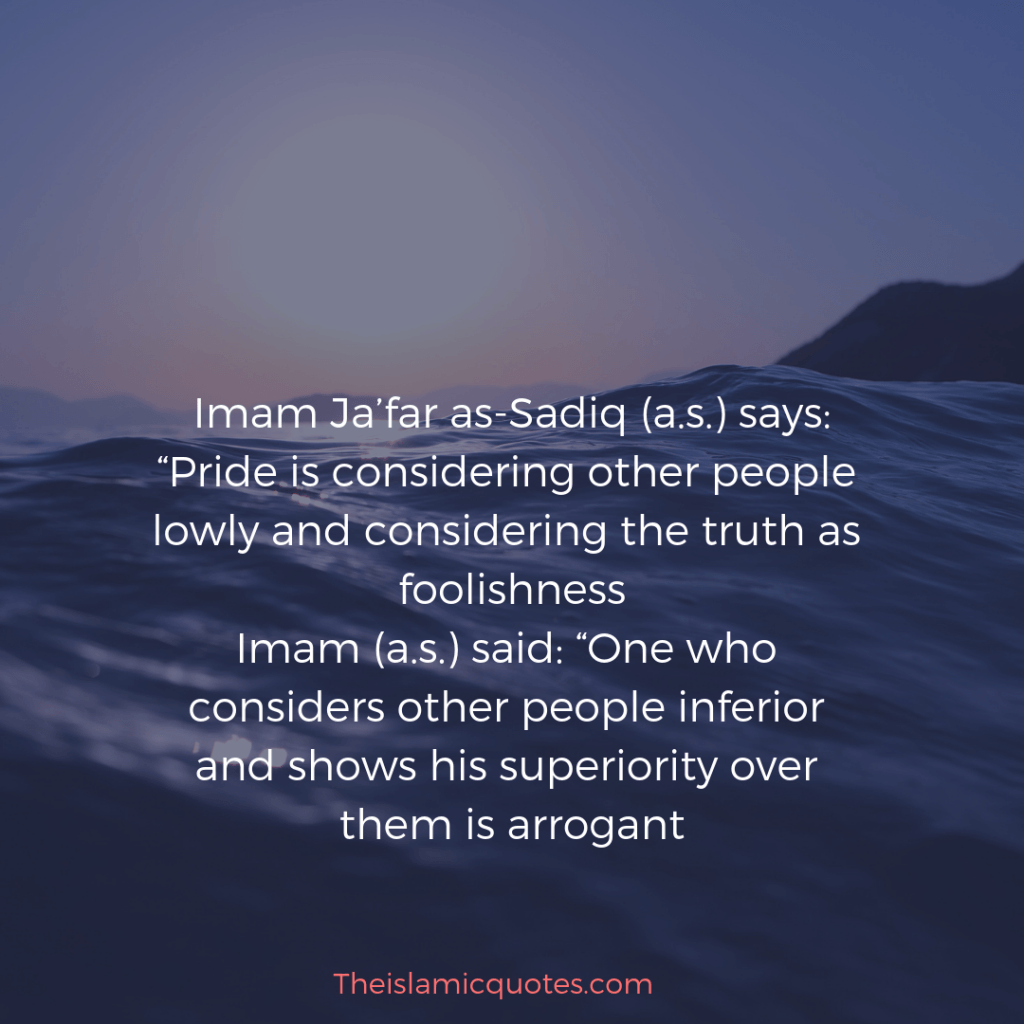 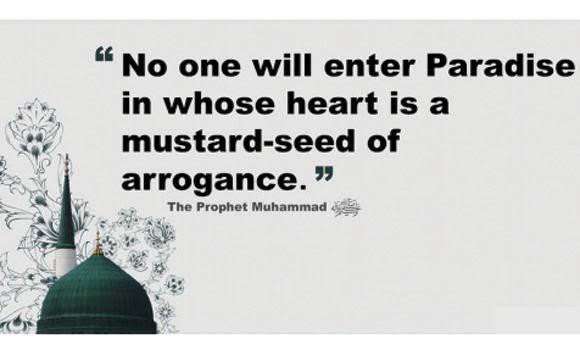 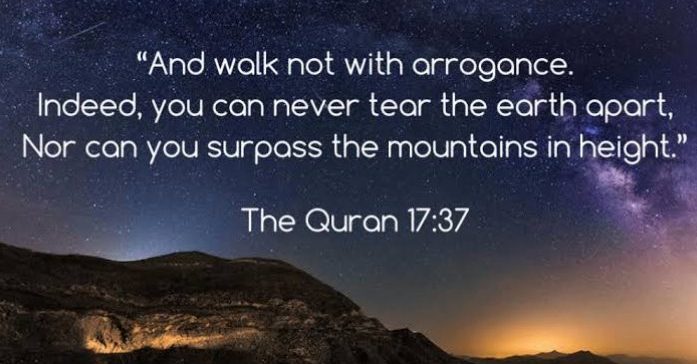 Pride is the trait that belongs to Allah SWT alone. No human or angel is near Him. He’s the Exalted one. His command is superior and should be followed. Those who disobey Him in Arrogance become the partners of Shaytan, Iblis. Iblis was the only who didn’t follow Allah’s order to prostrate before Adam AS. He, as he was made of fire, took pride in his creation and refused to bow his head before someone who was made of clay. For his arrogance, he was abandoned from Jannah and his final abode is Hell. 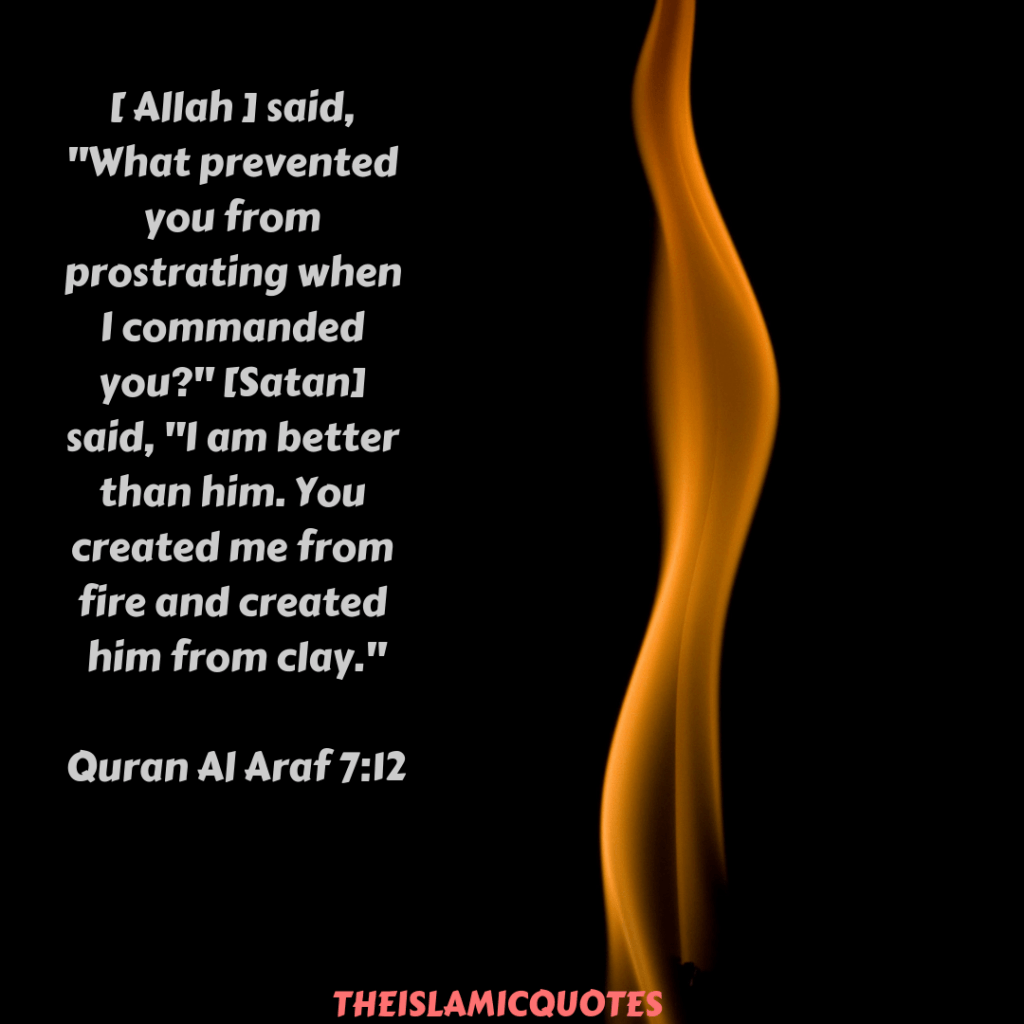 ↓ 15- The Eternal Abode of an Arrogant Person

Arrogance against Allah or people is the way of shaytan. People who follow his path and become arrogant, think themselves better than others just pave their way to hell. Their final residence is only Hellfire. The hellfire itself proves that the arrogant are the ones who are thrown in the fire. Here are The 10 Most Beautiful Sunnah To Follow In Daily Life so you can be a better Muslim. 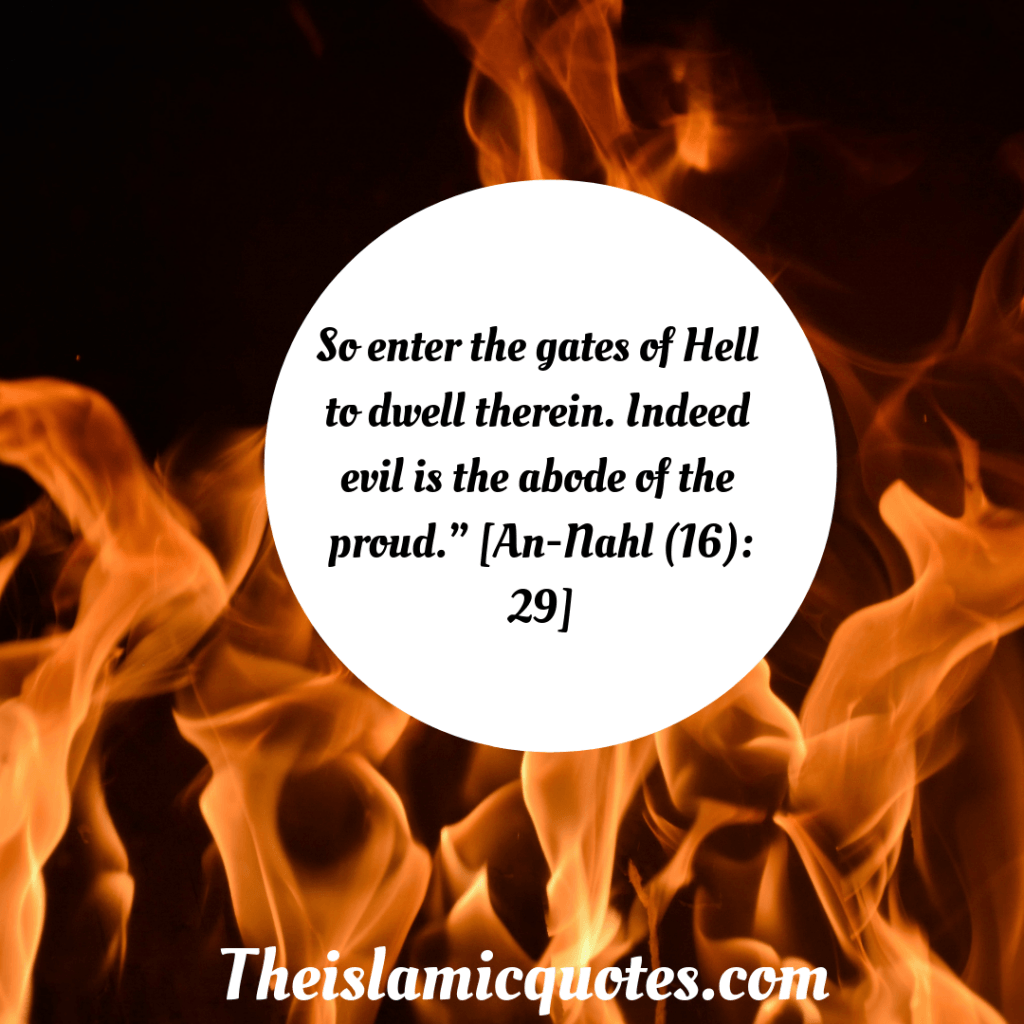 Humility and humbleness are loved by Allah SWT. In Islam, it is encouraged to treat everyone equally and with humility. The character of the Prophet Muhammad PBUH is the epitome of perfection and humility. He was compassionate towards people and always stayed humble before Allah SWT. Arrogance, on the other hand, is disliked by Allah SWT and is the behavior of iblis. To realize that Allah SWT is superior of All and we are all his slaves and we are helpless before Him, makes a person humble and compassionate. 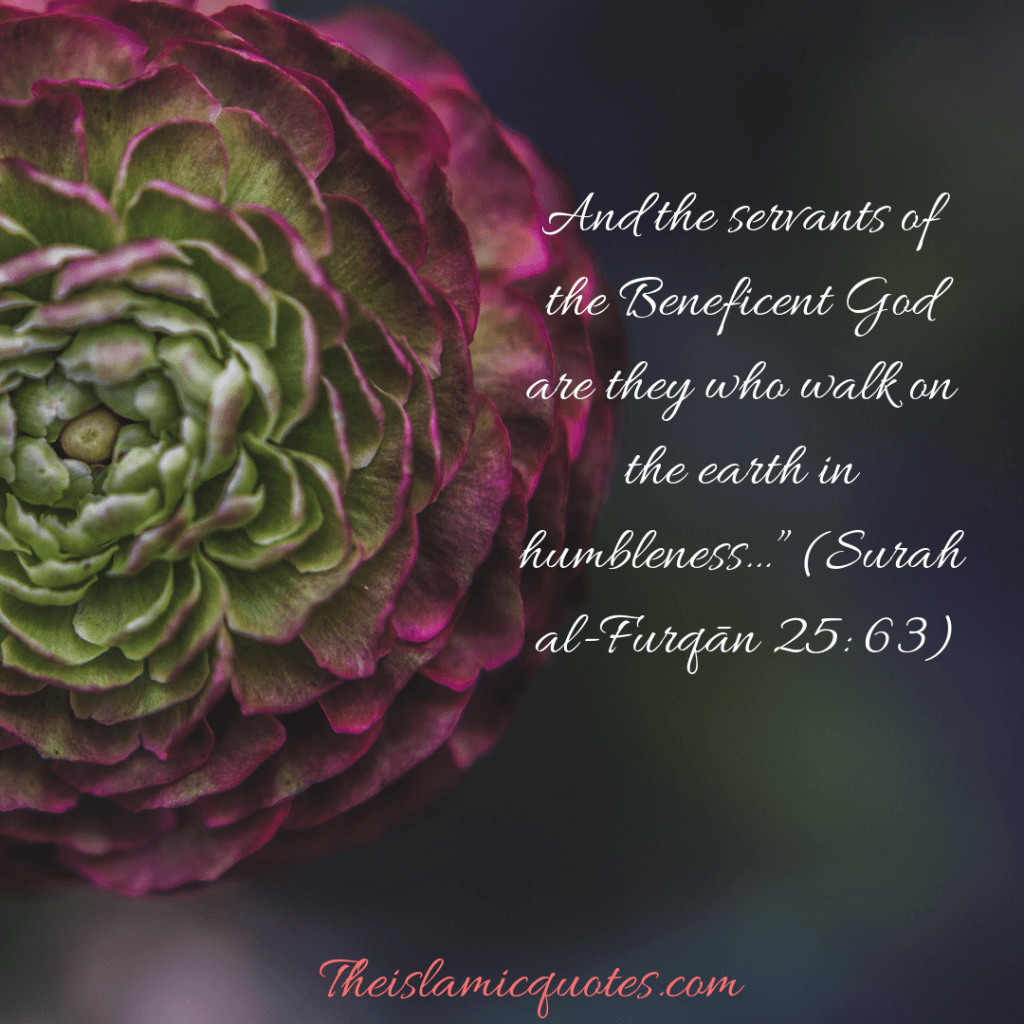 ↓ 13- An Arrogant has Nothing to be Proud of

A person who is arrogant doesn’t understand the fact that everything belongs to Allah Swt and whatever he has will be taken away from him. Considering other people as inferioir makes Allah unhappy as we should remember one fact that we are made of dust and we will be returned to dust one day by other people. 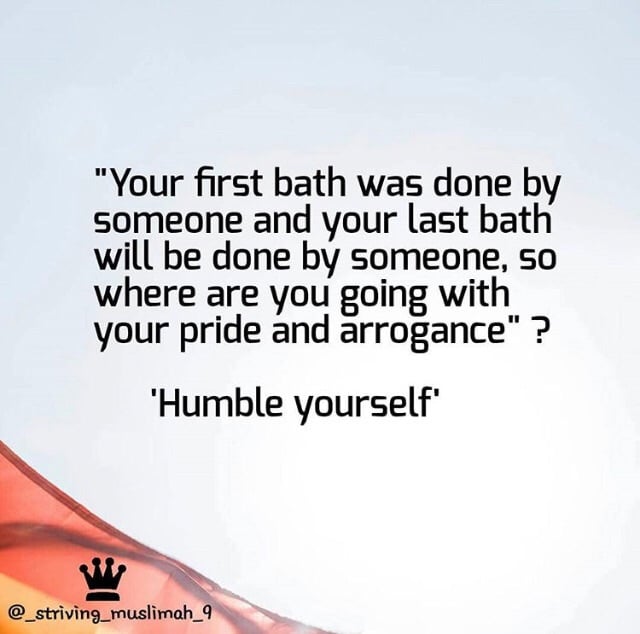 ↓ 12- The Consequences of Arrogance on the Day of Qayamah

Every sin has to be dealt with on the day of Qayamah. Allah SWT is the just so he makes justice in the hereafter. The arrogant will be gathered like ants on the day of judgment and thrown to the hellfire for their conceited behavior and pride. 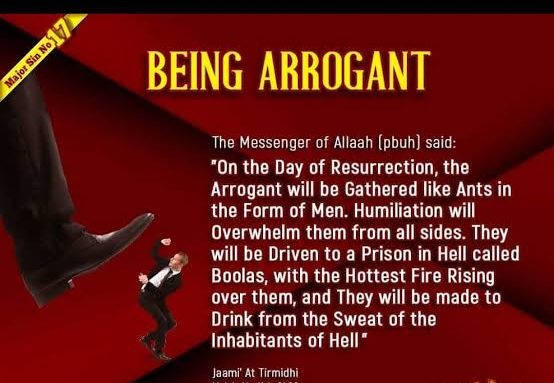 ↓ 11- Everything has been Given by Allah

People with arrogance in their behavior believe only in themselves and in their capabilities. The rich who’s arrogant and believes that his wealth is due to his success, fools no one but himself. The learned person who has the knowledge and is arrogant, invite someone the wrath of Allah SWT. The arrogant don’t understand that everything is given by Allah SWT and He is the only One who can take it away. So pride doesn’t belong to mankind. 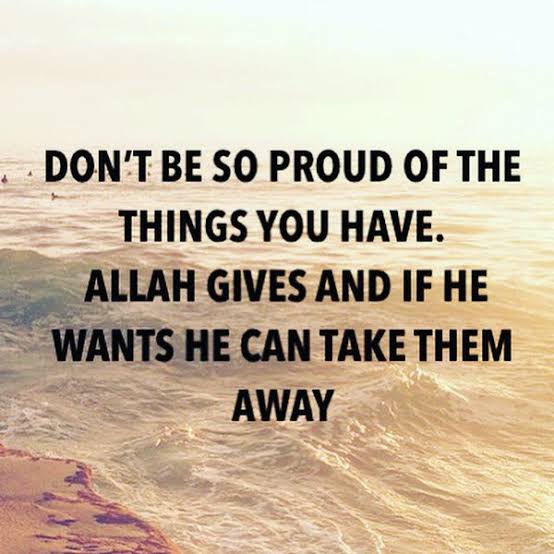 There are some Muslims who have blessed by Allah SWT for achieving a certain level of piety. A pious person should never think of himself high or better than others. A pious person who takes pride in his piety and treats others with arrogance doesn’t remain pious. 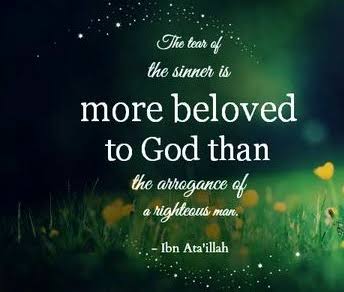 Knowledge is the blessing given by Allah SWT. It is not a human’s property or due to his capabilities. If a person has knowledge about religion, he shouldn’t judge others or treat them with pride. This kind of knowledge is useless and angers Allah. This is the responsibility of a learned person to give away what he has learned instead of becoming arrogant because of his knowledge. Here are 30 Inspiring Islamic Quotes on Education & Knowledge. 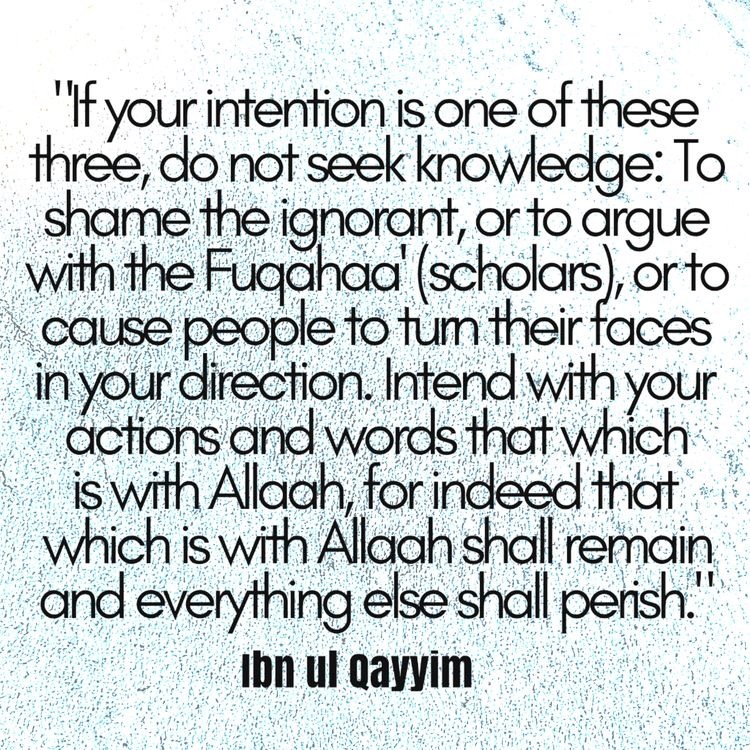 The arrogance of any kind is not favored or encouraged by Islam. It destroys a person’s Iman and corrupts his soul. But the arrogance due to which a person thinks low of others and considers the truth to be foolish is the worst kind of arrogance. 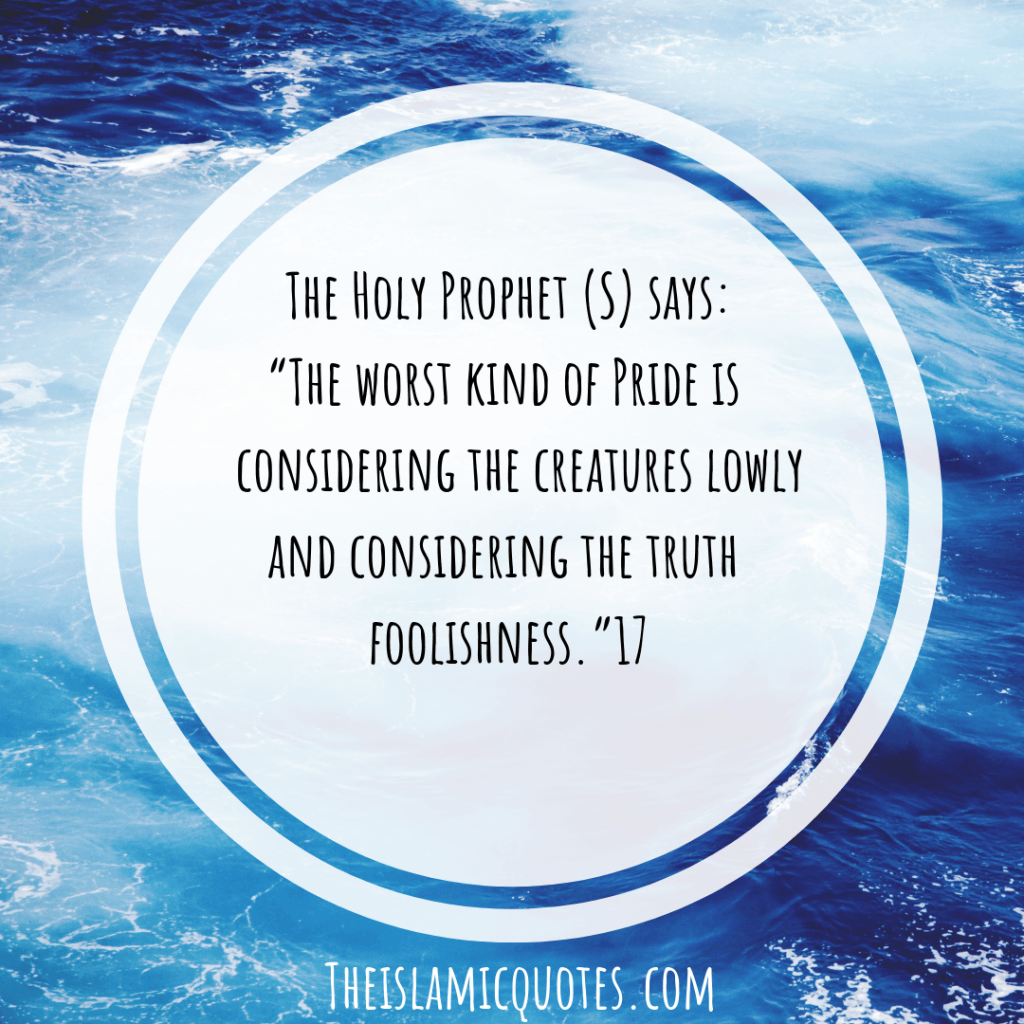 ↓ 7- Being Humble before Allah

Humility is the virtue loved by Allah SWT. Pride is the quality of Allah SWT and as his creatures, we should be humble towards him and love Him because we’re helpless in front of Him and He’s the only One who has power over everything. 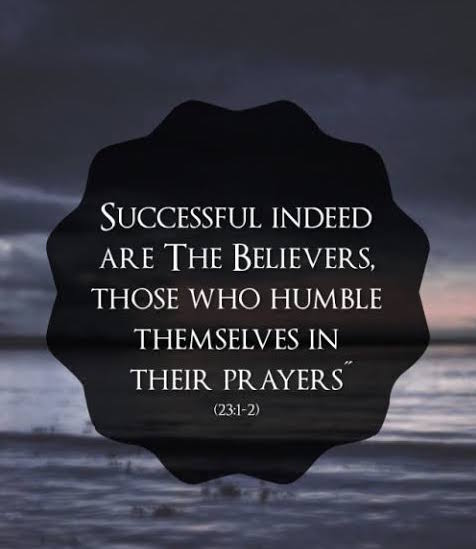 Allah SWT doesn’t need our worship or Ibadah, we are the ones who are in constant need of his approval and Him. An arrogant person doesn’t believe in Allah’s word nor make Dua before Him. 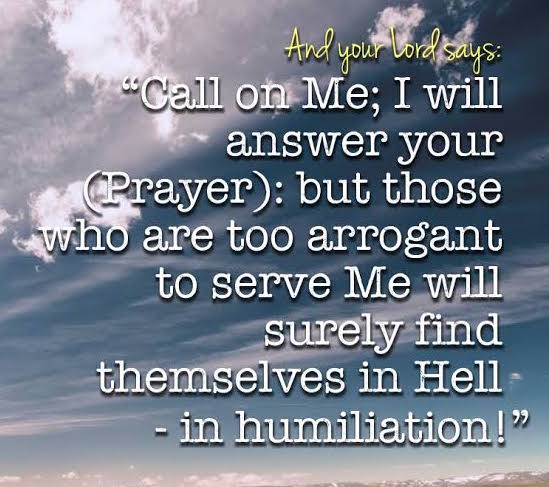 ↓ 5- Pride Sends You To The Lower Level of Disbelief

Iman is the most important part of a Muslim and it should be watered with Allah’s dhikr and following his commands. A person who involves himself in pride is at a lower level of disbelief. 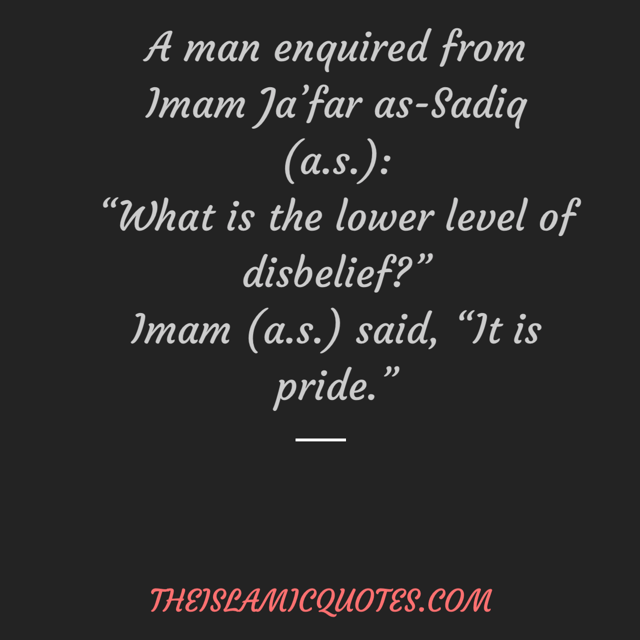 ↓ 4- How To Stop Being Arrogant

If you feel like you’re arrogant or have even the least bit of pride in your heart then worry not because Allah has blessed you with this realization that you’re wrong and He will guide you on the right path too InshaAllah. The first thing you should do is to ask for Allah’s forgiveness and do Astaghfar from the depth of your heart. There are many duas in the Quran that you can recite every day or every time you feel that pride is getting the best of you.

Here are some duas that you can pray to Allah after every namaz and He will surely forgive you and help you. Remember that Allah is every-pardoning, forgiving and merciful and he always forgives those who repent and return to Him. 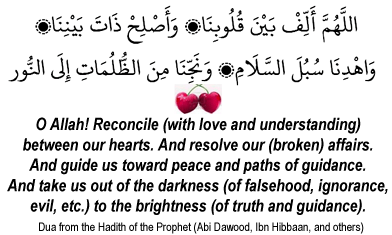 “Ya Allah, cleanse my heart of arrogance and pride and let me die as a sincere, humble Muslim..” 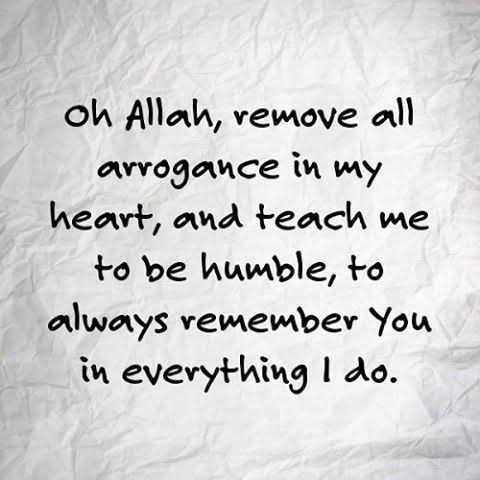 Pride is the quality that belongs to Allah SWT alone and we are slaves who are in constant need of his help. He himself states in the Quran that He doesn’t like the proud. We should be careful at every step to ignore our evil thoughts that could take us to the path of pride. 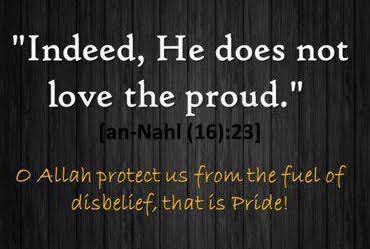 ↓ 2- Effects Of Arrogance In Islam

The proud ignores the truth and doesn’t consider himself inferior before Allah. He feels superior against others and behaves arrogantly toward everything. But Allah is the Al-Mighty who doesn’t like the proud, He turns away His Ayahs from the proud ones as they never wish to follow his command. 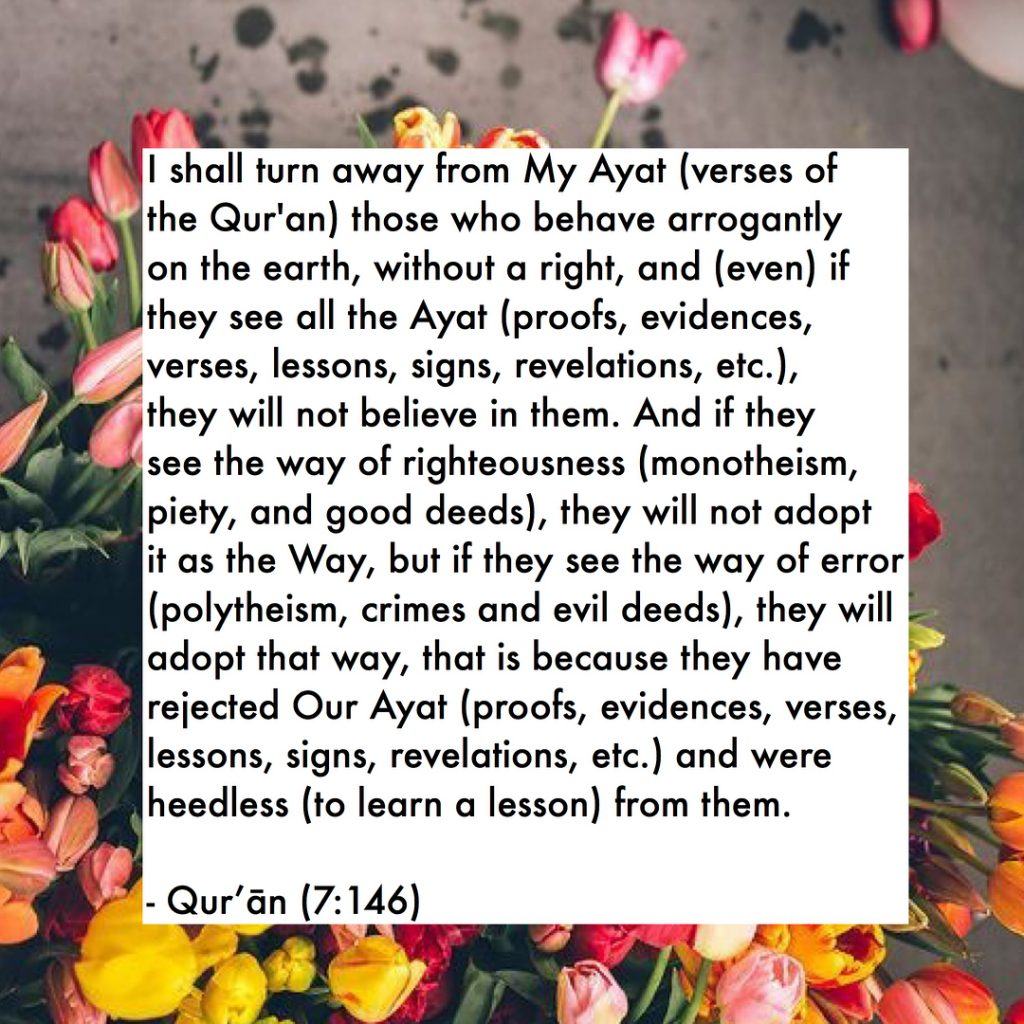 ↓ 1- Pride And Vanity In Islam

A proud person isn’t the one who’s loved by Allah. As pride and honor belong to Allah, a human being shouldn’t take pride in himself as he’s nothing but Allah’s creature. If anyone drags down his robe in pride, Allah will not look at him on the day if judgment. 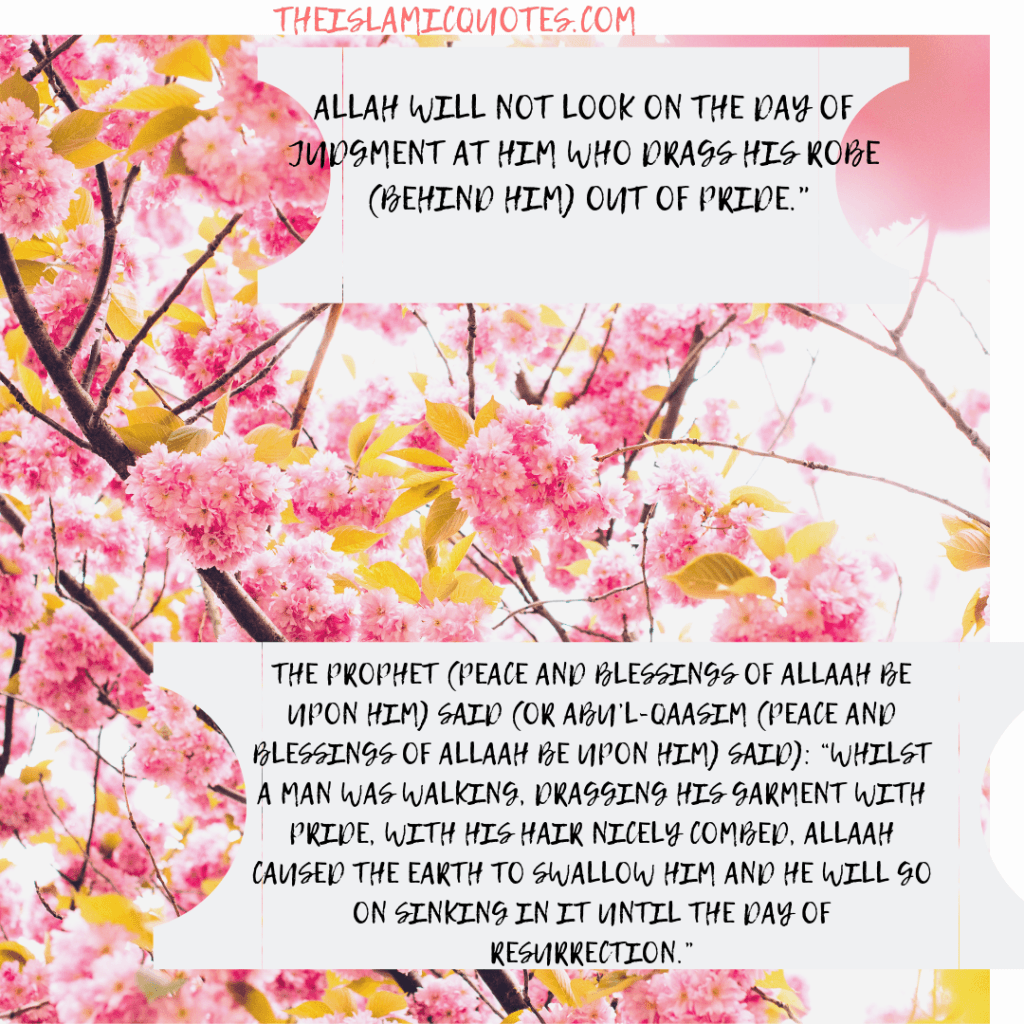