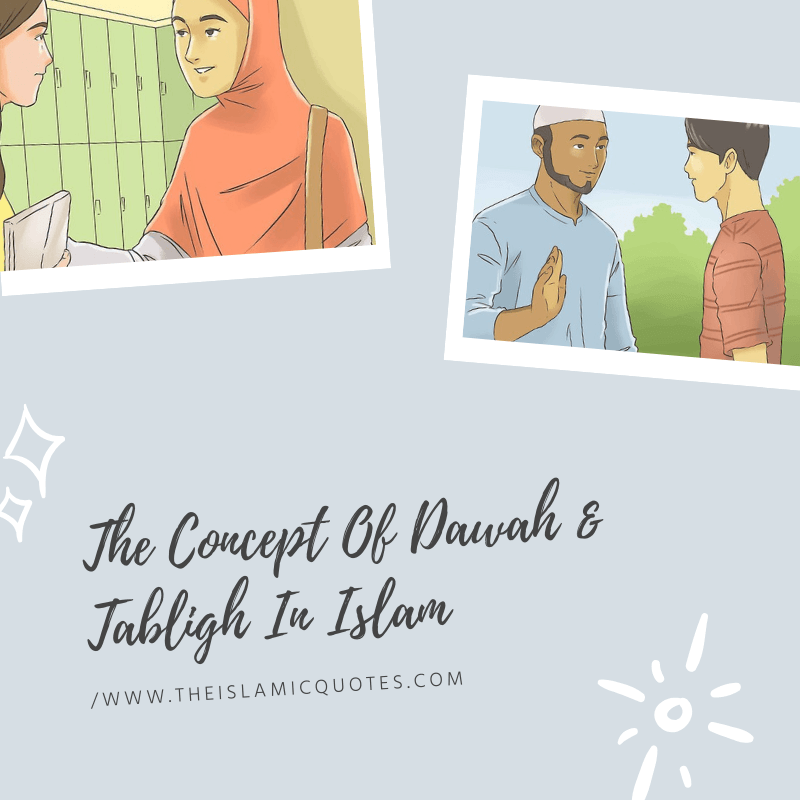 Complete Quotes on Tabligh and Dawah in Islam. Tabligh is the way of conveying Allah’s message. The message of Allah SWT is that He is the only one and there’s worthy of worship but Him only. Allah SWT sent His messengers to every nation in order to guide them.

Muhammad PBUH is the Last Prophet sent by Allah SWT. After him, it’s a Muslim’s duty to propagate the message of the prophet and continue his mission. Tabligh is the way to bring people in the circle of Islam.

Let’s start with a small but beautiful video that explains the concept of dawah.

Tabligh in literal terms means ‘To Convey.’ Conveying the message and preaching the teachings of Islam is what tabligh actually means. The person who does tabligh isn’t any special person, he is just an ordinary Muslim who calls people towards the true religion ‘Islam.’ Tabligh can be done for the nonbelievers in order to invite them towards Islam and it can be done for the Muslims who become lost and need guidance. 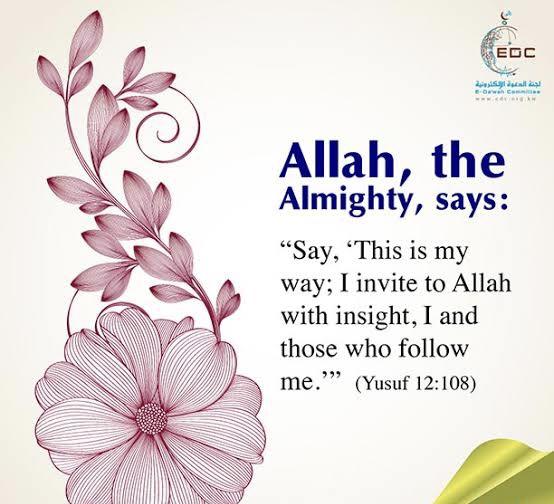 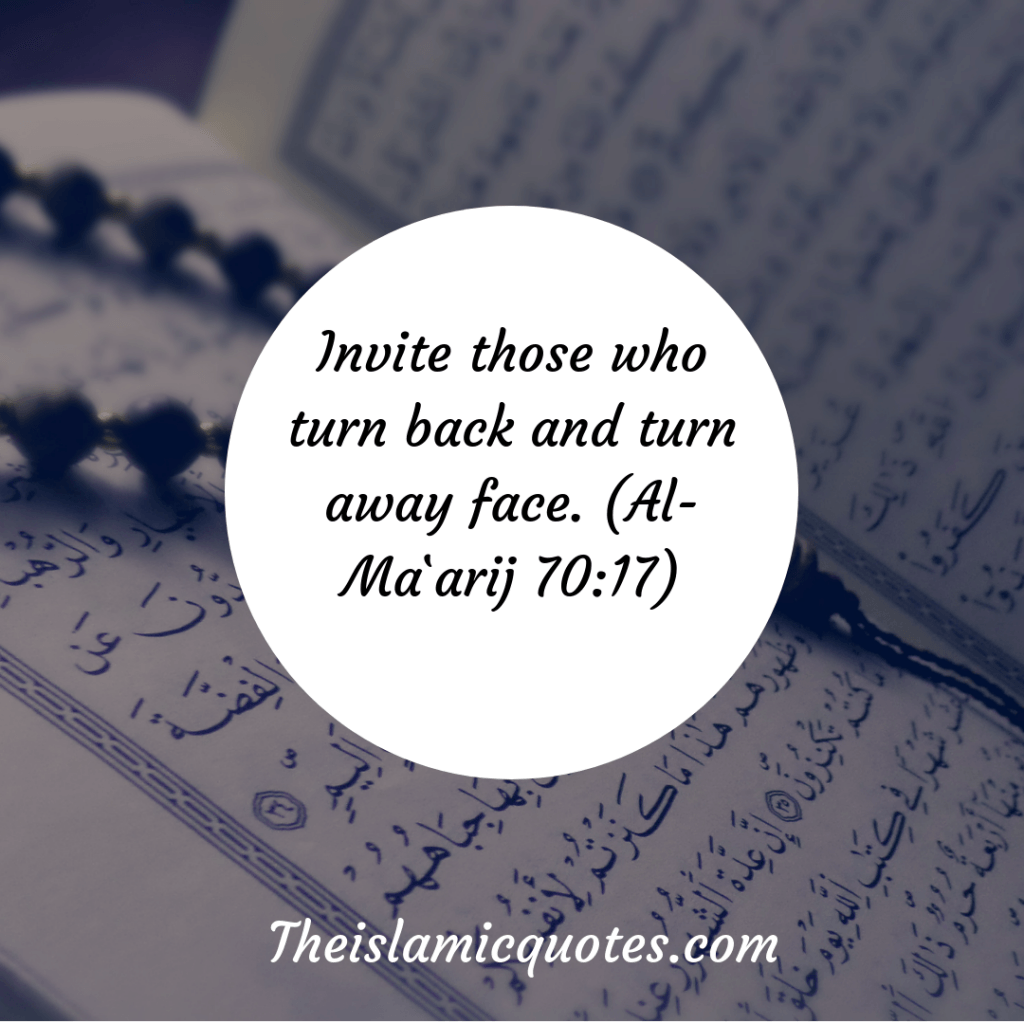 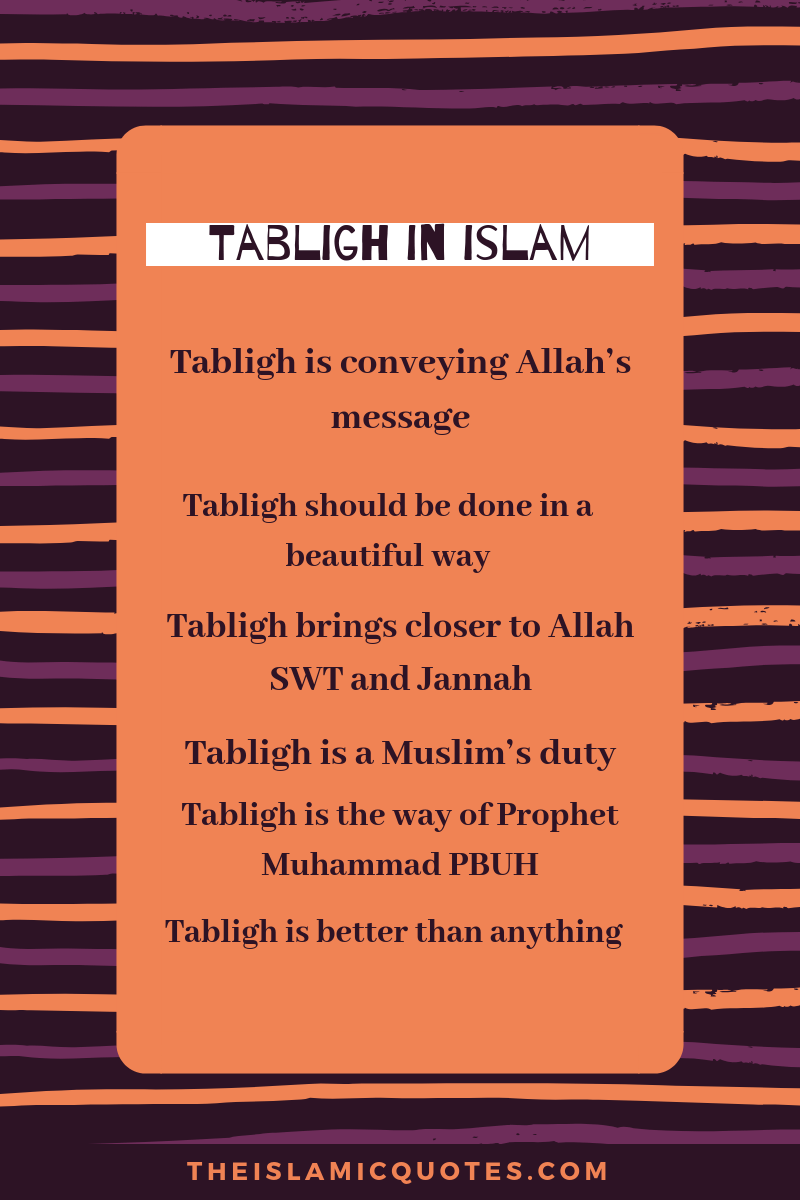 ↓ 20 – Importance of Tabligh in Islam

The process of tabligh toward Islam has been going on for centuries. Allah has sent His messengers in every nation and guided them to the right path. From Hazrat Ibrahim to Hazrat Muhammad PBUH, the true message of monotheism has been promoted on the instructions of Allah SWT. When Islam was revealed to Prophet Muhammad, He was the one who preached it and asked his Ummah to propagate his message amongst Muslims and the nonbelievers. It is the duty of Muslims to invite people towards the true message of Islam. 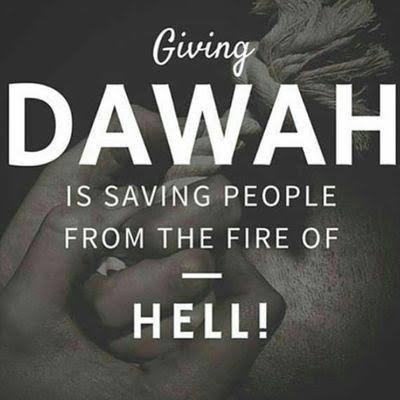 Allah has sent His messengers to every nation in order to guide them on the right path. The Messengers would carry the knowledge of Deen and message of Allah SWT in their hearts and invite people towards the only true God, Allah SWT. It became the duty of a messenger to propagate what had been given to him by his Rab and thus he would do tabligh to gather Muslims under one banner. 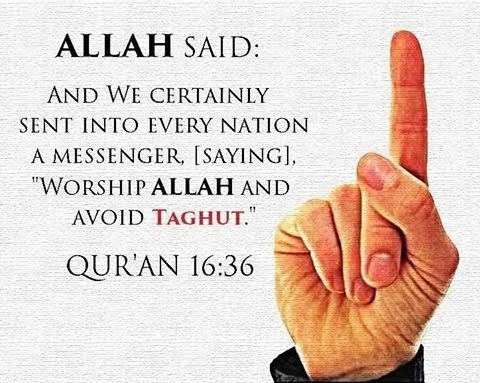 ↓ 18 – The Era of Prophet Muhammad PBUH and Tabligh

Prophet Muhammed Pbuh started inviting people towards Islam secretly as it wasn’t commanded by Allah SWT to tabligh openly. He first invited his wife Hazrat Khadijah and she was the first Muslim woman to accept Islam. Hazrat Ali RA was only 10 years old when he accepted Islam.

Prophet Muhammad PBUH has faced hard times while inviting people towards Islam. He had been mocked by his own people, he also had been insulted in many ways but he never gave up on them. He would always forgive the mistakes of his people and made Dua for them. And invited them with mercy and love. Many kuffar accepted Islam due to his duas and kind behavior. He is the true example of doing tabligh towards Islam. 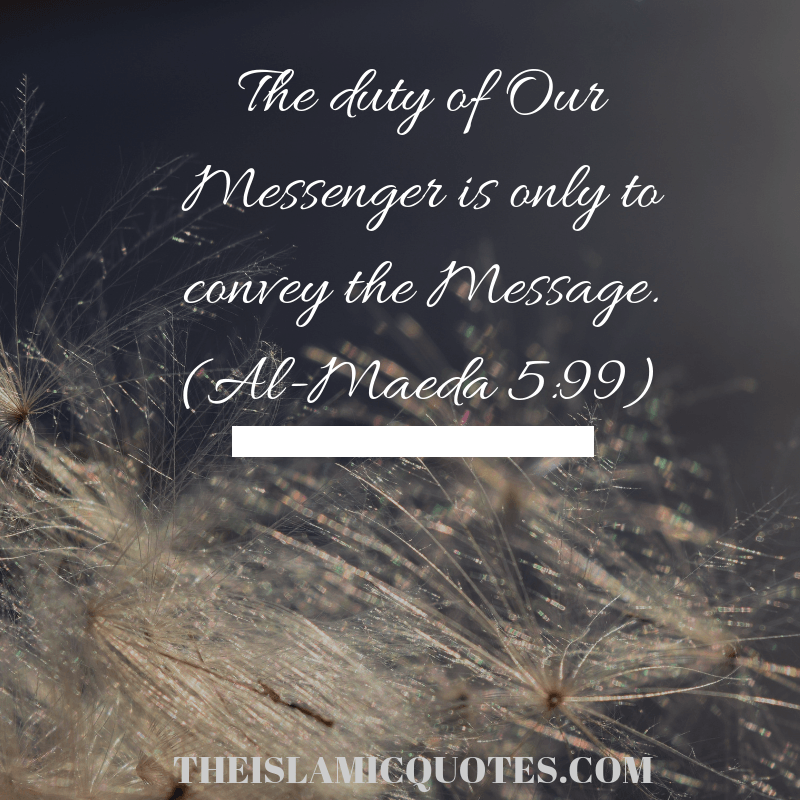 Allah SWT gave Islam to prophet Muhammad PBUH but instructed him to preach and promote it secretly. The Prophet did tabligh secretly for many years and invited people towards Allah until it was revealed by Allah SWT to invite and do tabligh openly. 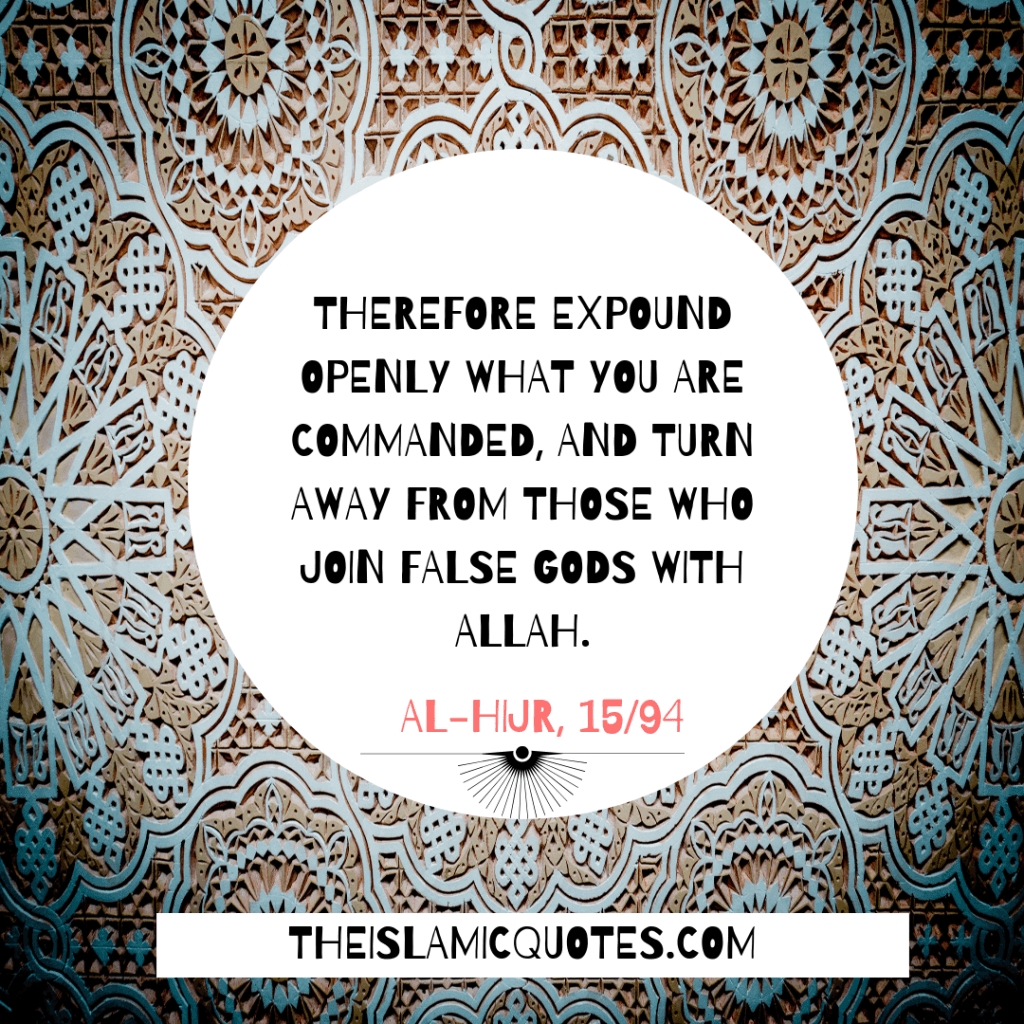 Allah has commanded His messengers to invite people to His Deen e Islam which is the true religion. He Commands in Quran to preach the message of Islam to the people and He will guide them to the straight path if He wills. 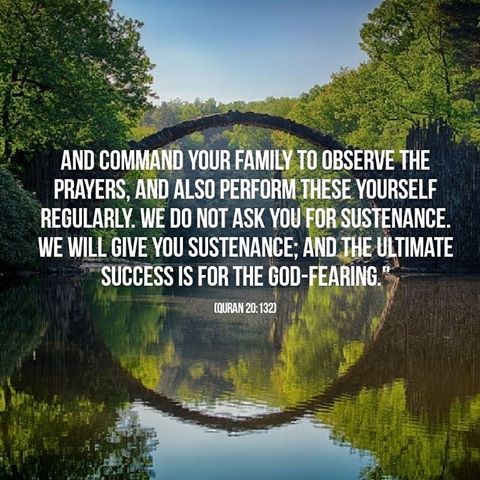 Tablighi Jamaat has been created by Maulana Ilyas to bring Muslims under one banner. Its members urge the nonbelievers to come in the circle of Islam and also Muslims who need guidance. This nonpolitical party holds seminars and different religious gatherings in order to awaken the love and respect for the religion of Islam and spread the true message of Allah SWT. You should also have a look at these 22 Islamic Quotes on Sunnah Fasting & Its Benefits.

↓ 14 – The Knowledge of Deen should be Shared 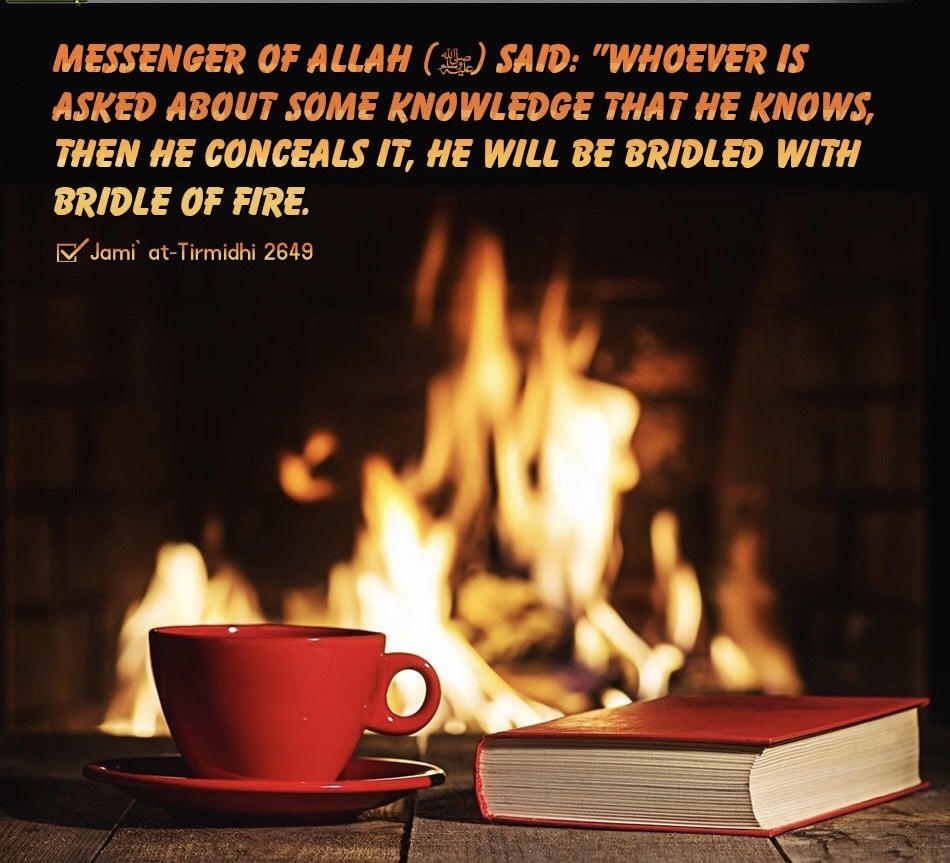 ↓ 13 – Tabligh According to Hadith 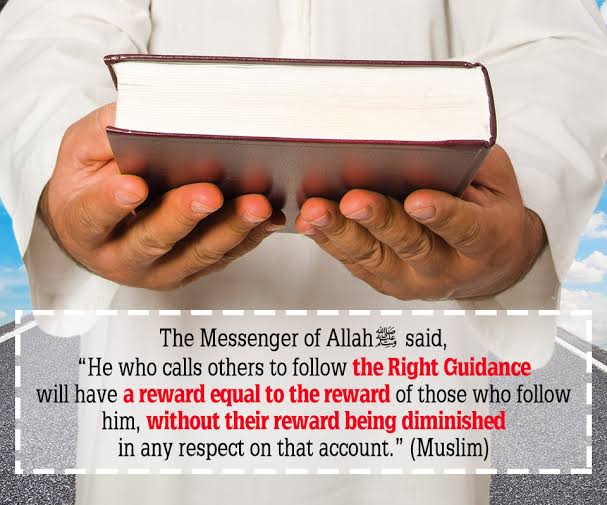 A Muslim is the slave of Allah SWT and he’s the one who should invite the disbelievers to Allah SWT and His religion Islam. It is the duty of a Muslim to also help those Muslims who are lost and in need of guidance. He should carry and propagate the message of Prophet Muhammad PBUH and fulfill his duty towards his religion. The Dawah and tabligh should be without violence and should be done with wisdom and care and with love. 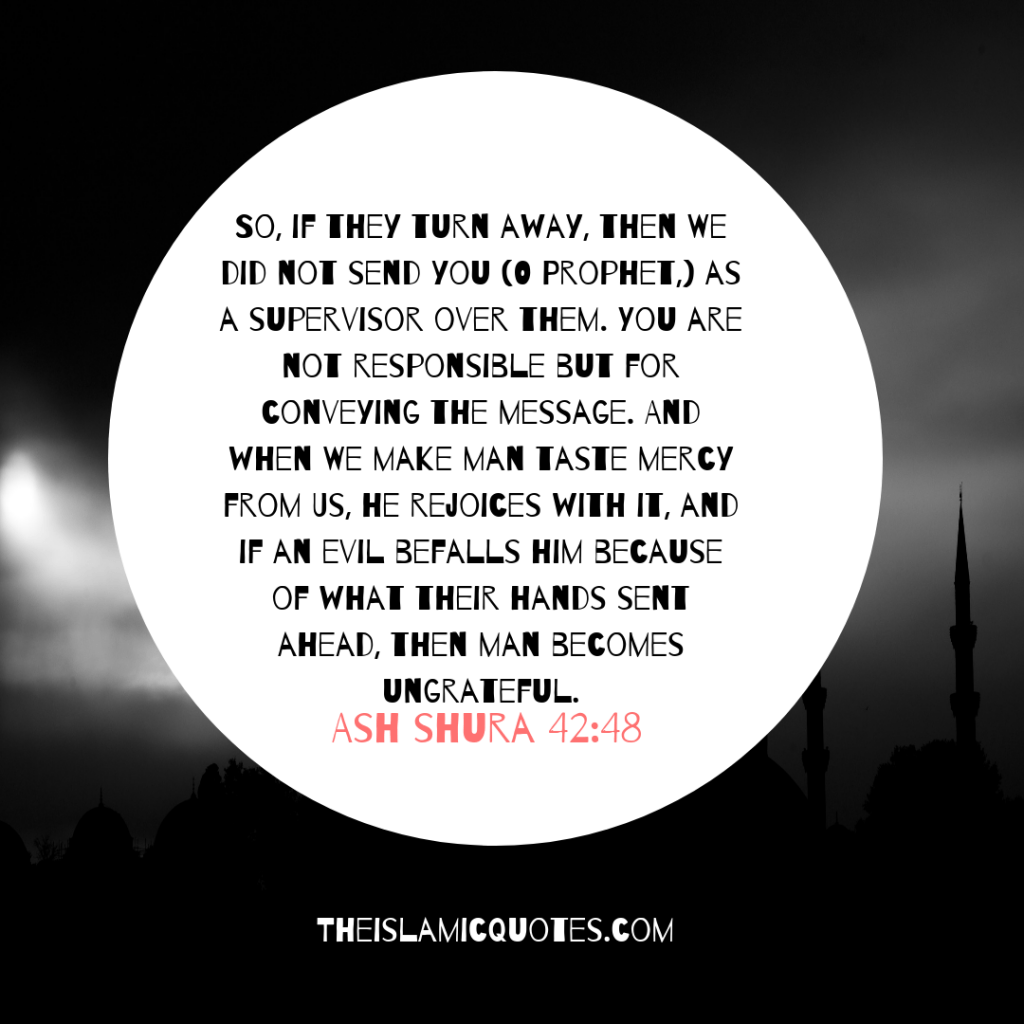 Tabligh towards Islam is the true way of living a fulfilled life for a Muslim. But in order to preach the message of a peaceful religion, Islam, it is necessary for the preachers to invite with care and wisely. The disbelievers aren’t aware of the essence of Islam so the burden of responsibility of showing the true and peaceful side of Islam is on the shoulders of the preacher. He should use kind words and beautiful ways in order to invite them to the most Merciful and Forgiving Lord, Allah SWT. 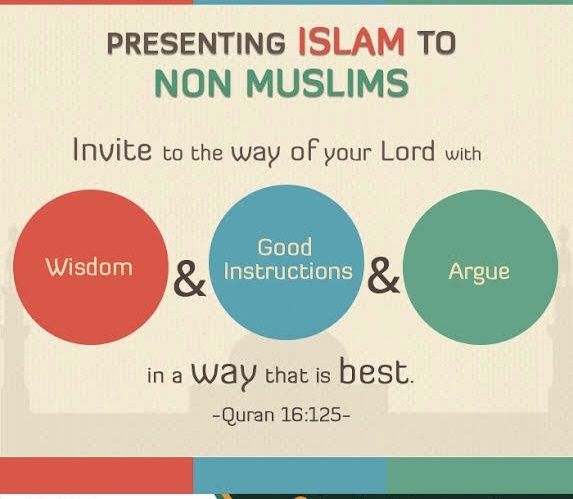 ↓ 10 – Guidance from Allah and Tabligh

The duty of the messengers is to propagate and preach what Allah asks them but the true guidance is only from Allah SWT as He is the only one who can rightfully guide people if He wills. He says in the Quran to the prophet that indeed he’s the messenger but he cannot guide everyone he loves. 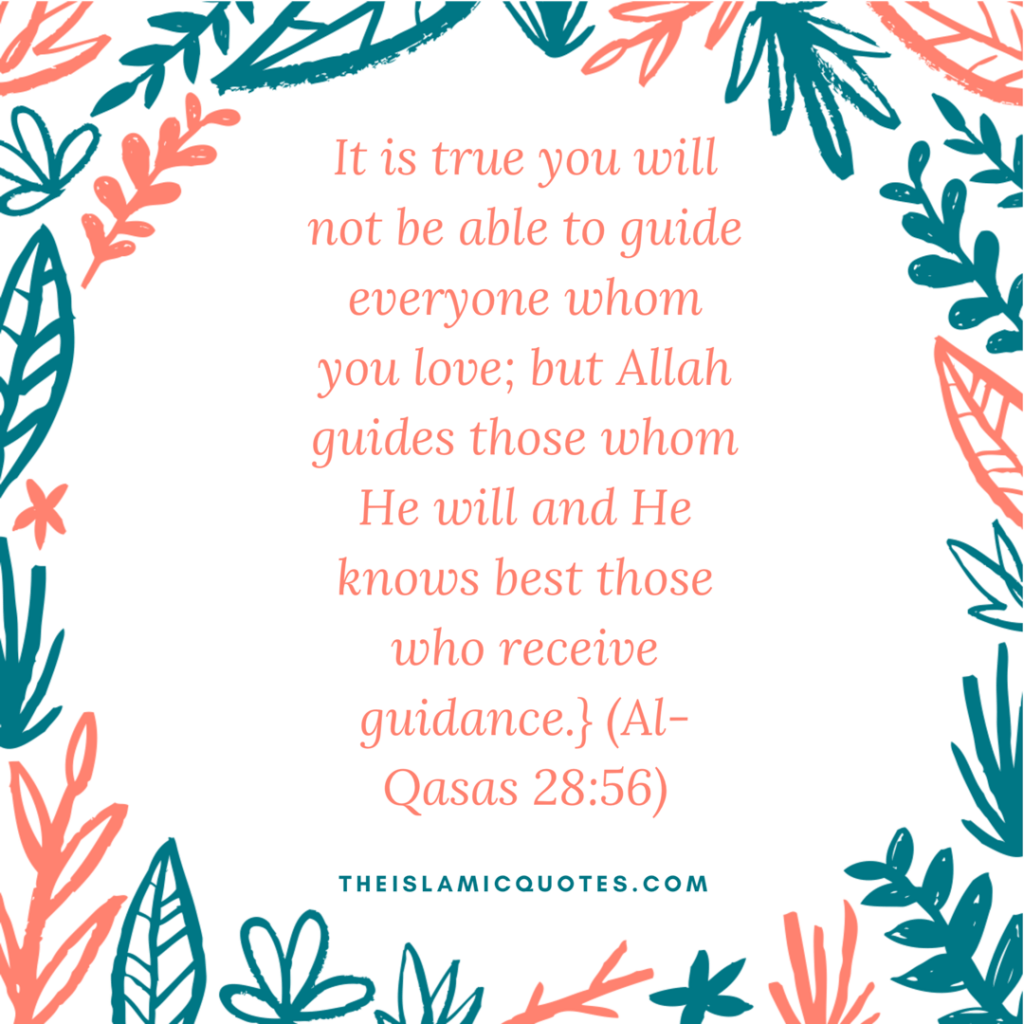 Islam is the religion of mercy and love. A person who has enough knowledge of the religion should pass it to others in order to fulfill his duty as a Muslim. His way of inviting must be kind and empathetic as he draws the image of Islam. Allah has announced great rewards for the believers who come towards Him and also for the people who expend great efforts to call others towards the right path. 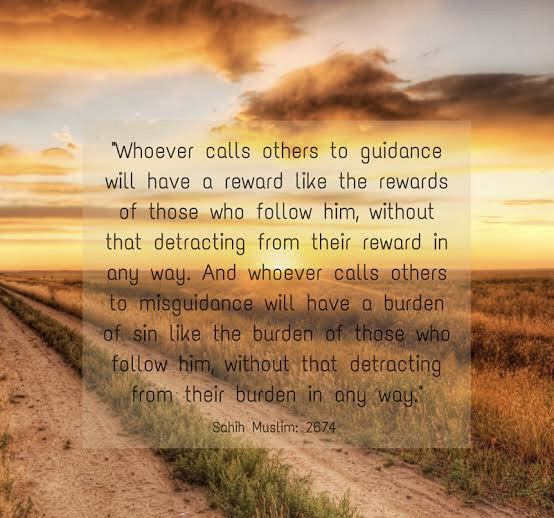 Prophet Muhammad PBUH is the perfect example for us to follow Islam. He had spent his entire life spreading the truth and dedicated his efforts to help people come towards Allah SWT. He always prayed and wept for his Ummah and asked them to continue his mission, which is to promote Islam and call others towards Jannah and Islam. 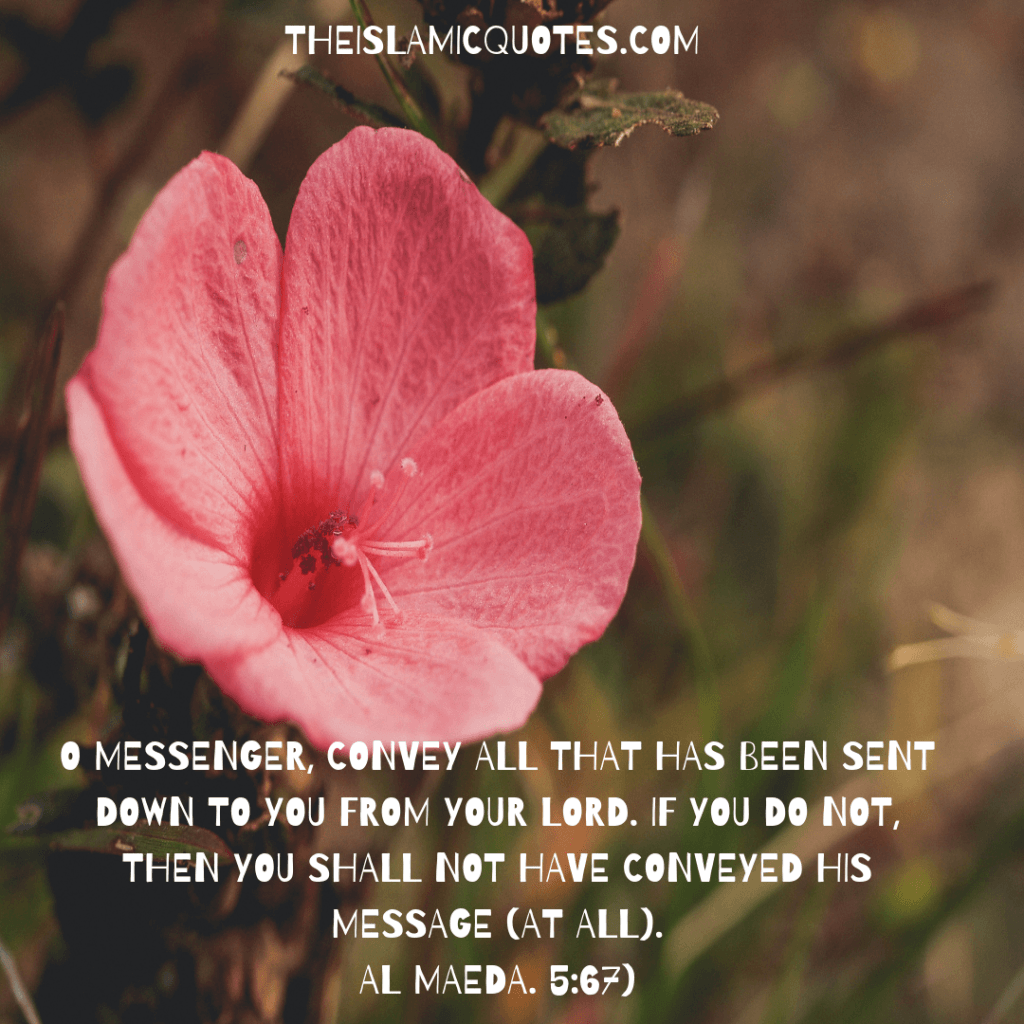 ↓ 7 – Tabligh is Better than Anything

Da’wah and calling people towards Allah SWT and Islam takes efforts and patience as it is a great responsibility to carry. Allah has appointed Rasool and Anbiya to nations to guide them to the straight and true path. Tabligh in a rightful manner is the way to live a fulfilled life as a Muslim and has rewards promised by Allah SWT. In the Quran, Allah says that calling people towards Him, and his words are better than anything. 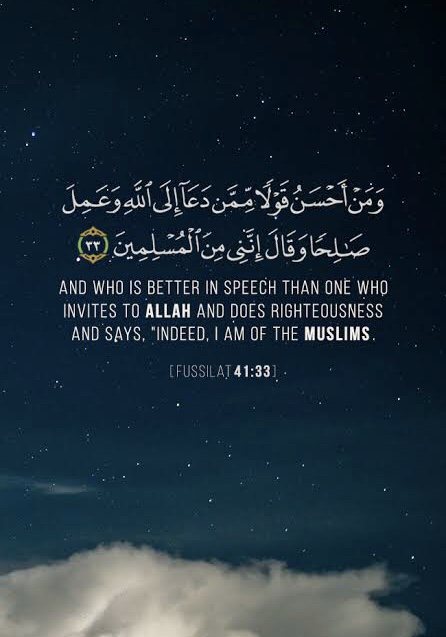 ↓ 6 – Success in the Hereafter

The success in the hereafter is better than any success in the world. People who go after the success of hereafter and do good deeds will attain rewards for their efforts. Tabligh and Da’wah bring a preacher close to his goal and Jannah. Allah himself promises in the Quran that they’ll be successful in the hereafter for what they do sincerely to invite the disbelievers and other Muslims towards Him. 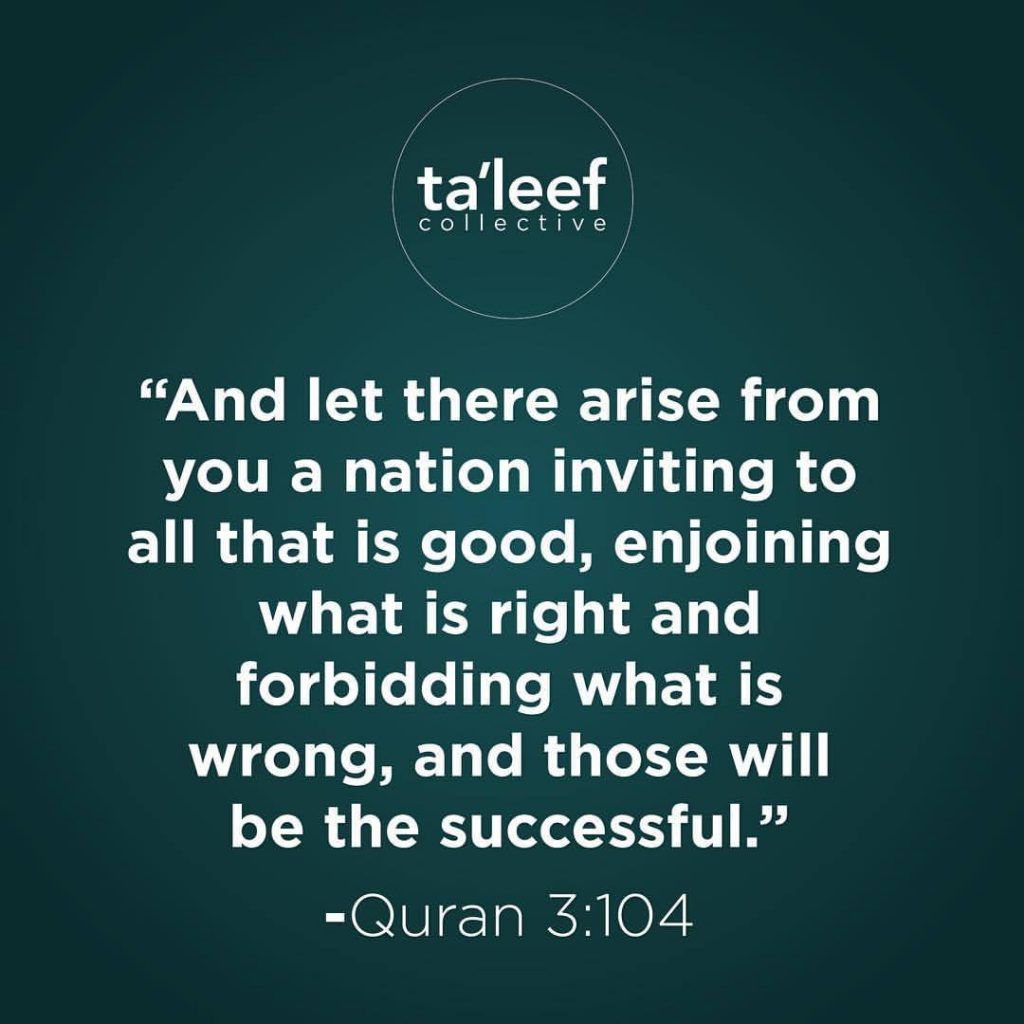 ↓ 5 – Calling Toward Allah with a Pure Heart

Tabligh and Da’wah require one to be a good human being and true to his cause. His heart should be free of any judgment and pride. He should never take pride in himself for being a preacher and a mentor to others. He should never judge anyone who’s lesser than him in faith and should never consider himself above anyone. He should be humble and kind and follow the footsteps of Prophet Muhammad PBUH. Here are 50 Best Allah Quotes and Sayings with Images. 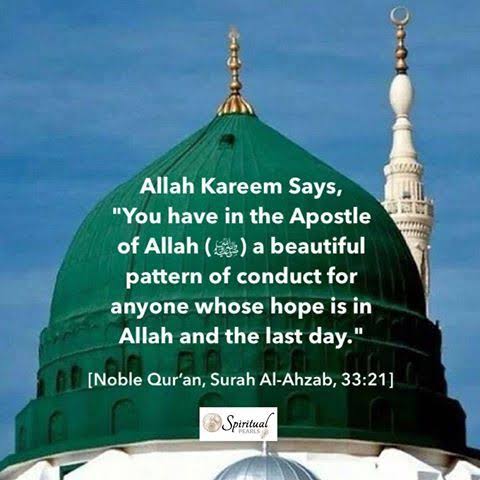 ↓ 4 – Tabligh Should be For the Sake of Allah SWT

A preacher who’s propagating the message of Allah SWT should only do it for His sake. He should never wish for people’s approval and to attain a good image in the society. He should only invite people towards Allah SWT only for the sake of Him with a pure heart. 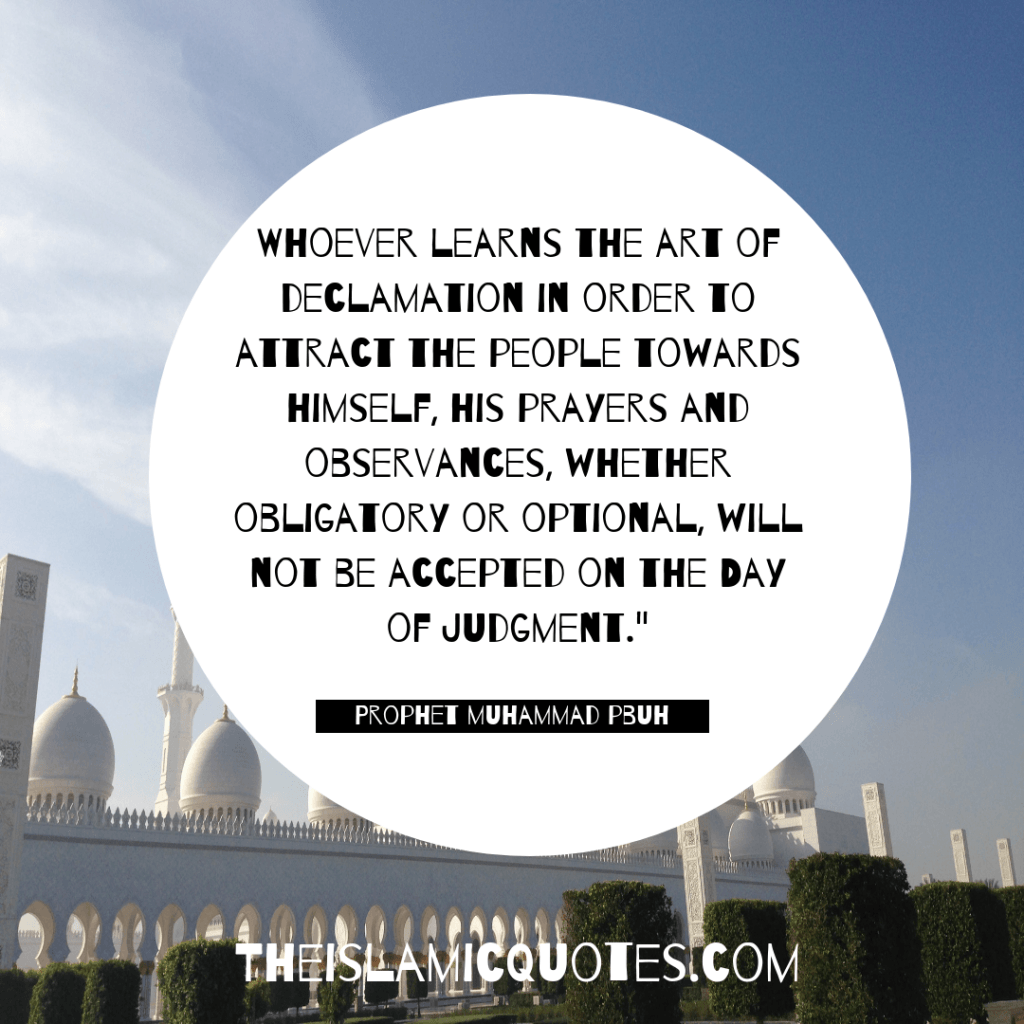 Dawah and Tabligh require kindness and mercy. Prophet Muhammad PBUH and others before him always acquired the way of inviting people with kindness and love. They would give glad tidings to the people before warnings. Violence is never the answer so preaching mercilessly and threats will damage the image of Islam. They should adopt such a way that awakens the yearning to listen to the words and message of Allah SWT. 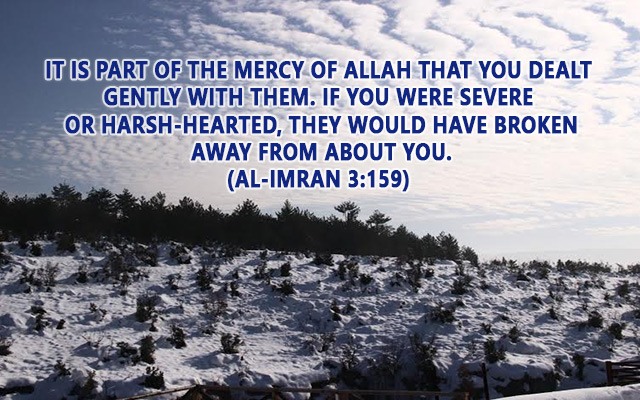 Actions speak louder than words is always true and when it comes to preaching and tabligh, this saying becomes clearer. As a preacher should be a doer first in order to invite others to the right path. He should be a faithful Muslim and  carry the message of Allah SWT in his heart and follow the footsteps of Prophet Muhammad PBUH 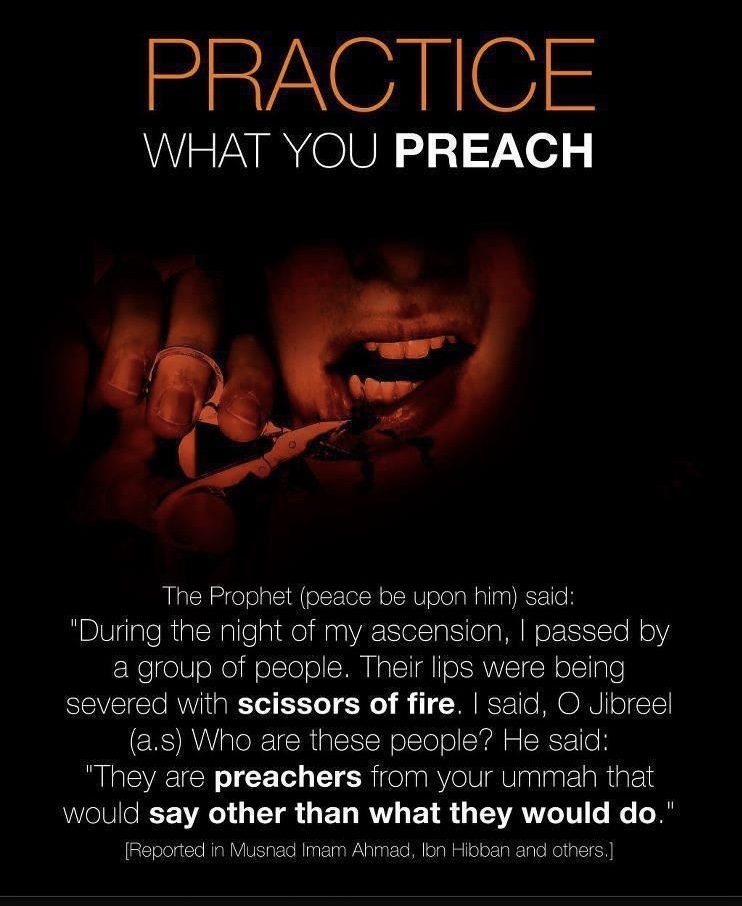 Status of Teachers In Islam- 12 Islamic Quotes For Teachers

23 Quotes About Arrogance And Pride In The Light Of Islam