Treatment of Servants in Islam. Allah has given the beautiful religion of peace and love, Islam, to Muslims. Being a complete code of life, this religion has discussed each and every relation and a way to treat other people in a kind manner.

What Are The Rights Of Servants In Islam?

We should always treat our domestic help kindly and compassionately because every human being is equal in the eyes of Allah SWT and we’re all His creation. Moreover, Allah has clearly mentioned that the one who does not show mercy upon His creatures, no mercy will be shown on him by Allah.

So today, we’ll be discussing everything that Islam has taught us about treating out servants kindly.

↓ How The Prophet Treated His Household Help?

As we discussed above, the relationship between Anas Bin Malik and Prophet Mohammad is the perfect example of how slaves should be treated as he was employed at the Prophet’s place since his childhood. The Prophet was extremely affectionate towards him and he would even visit his family to share meals with them. Once, Anas’s mother asked the Prophet to pray for his son and the Prophet’s prayer was answered and Anas got everything he desired including wealth, children and grandchildren. If you want to follow more of the Prophet’s sunnah to be a better Muslim, do go through these simple but beautiful Personality Traits Of Prophet Muhammad (SAW) Every Muslim Must Know.

↓ What does Quran Say About Servants?

Islam is the religion of peace and love. Everyone is equal in the eyes of Allah SWT. The domestic help and workers that work for their employers deserve respect and kindness. Allah in the Quran Himself says that he has raised ranks of some us but our ranks and wealth has no value in His eyes. Our servants and we all are equal in His eyes. 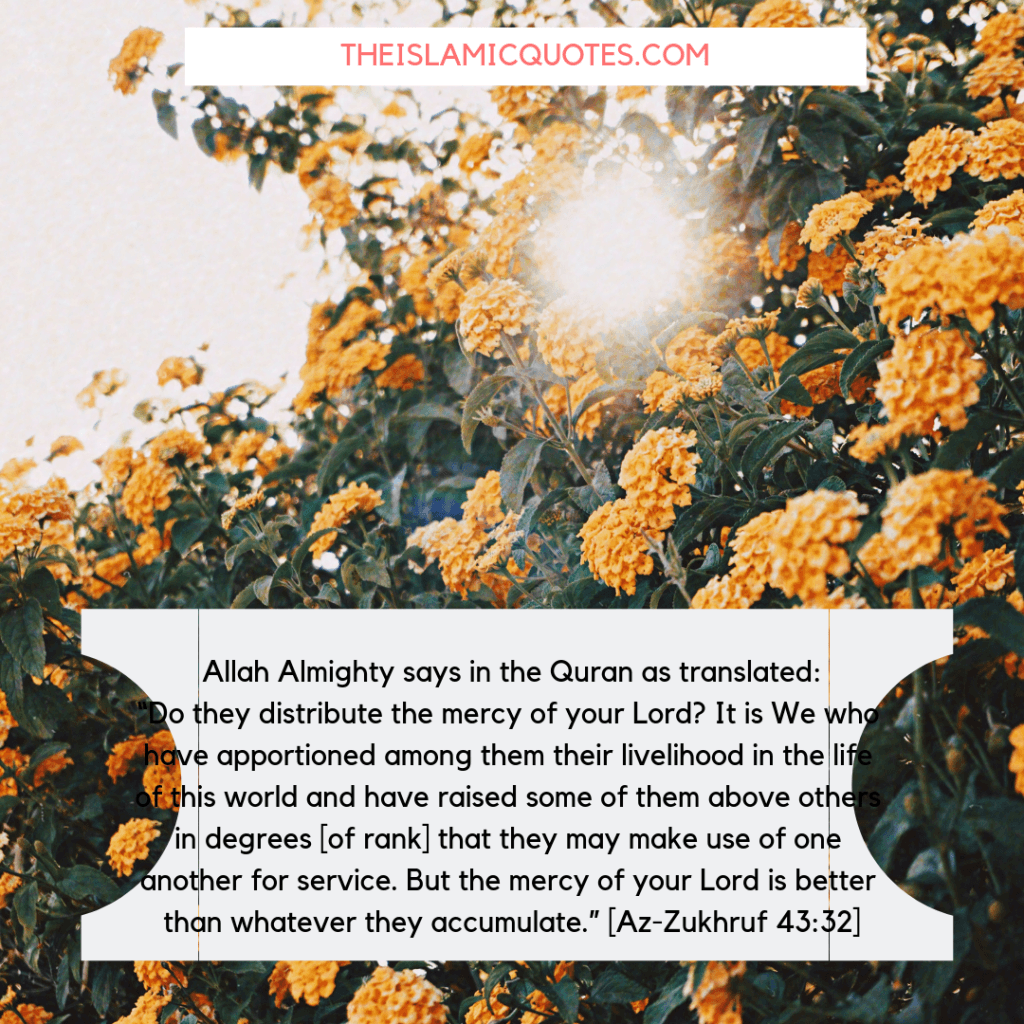 ↓ Hadith On Treatment Of Servants 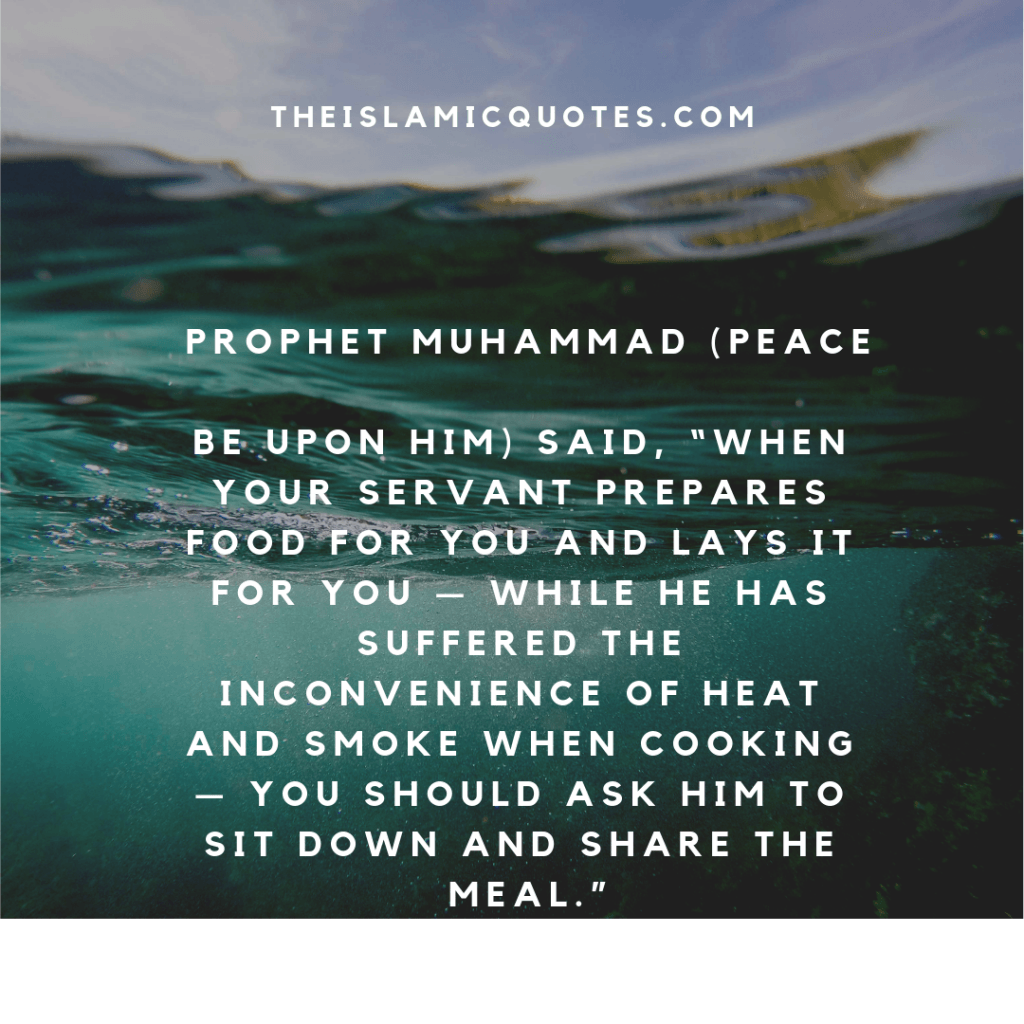 ↓ 14 – Don’t Overburden Them With Chores

Every human being has a certain level of energy and capacity. Overburdening makes them sick and unhappy. Allah promises in Quran that He doesn’t burden his creatures more than they can bear although He’s the Authoritative One. One who has authority over his servant or house help, shouldn’t take advantage of his power. He shouldn’t overburden him with different chores. The burden should be shared with other helpers or the one who employs help. 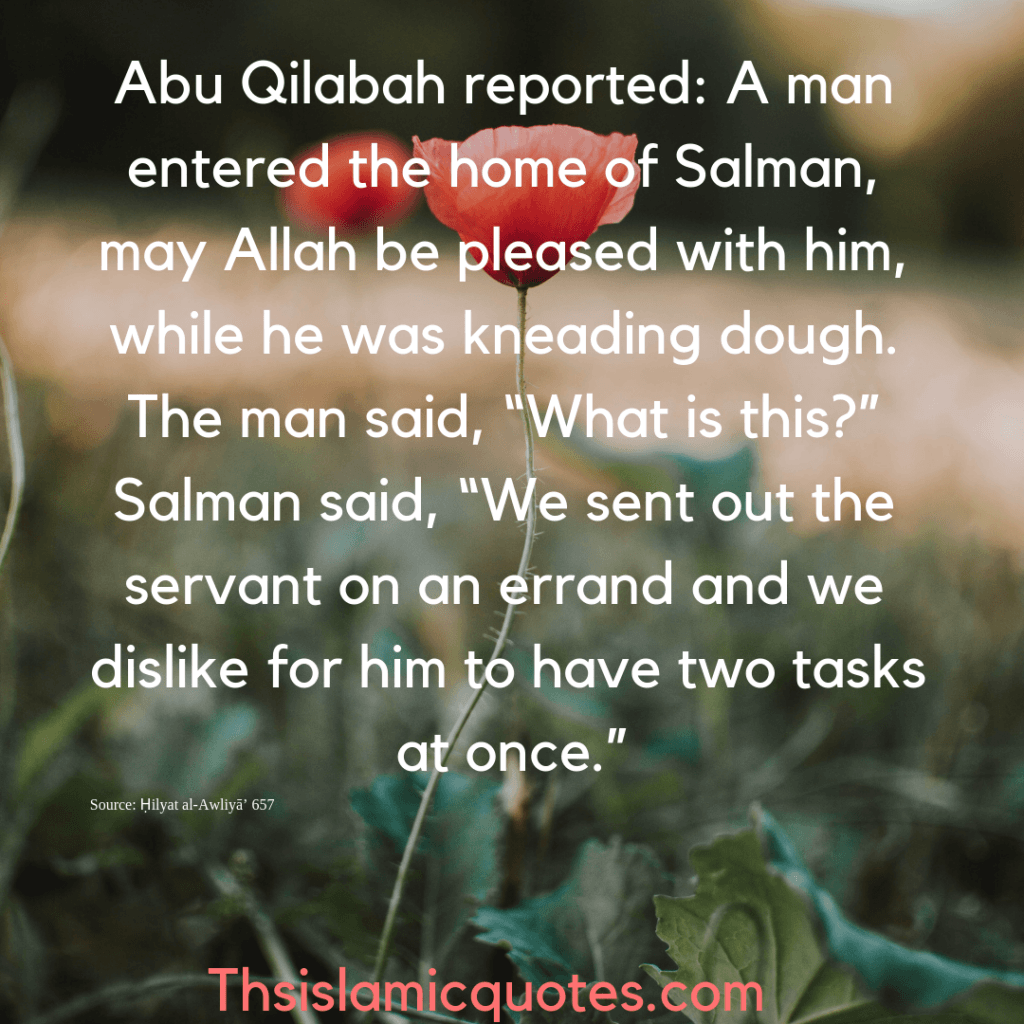 When you have servants at your home, it’s your responsibility to look after your own possessions and wealth. If your valuable items are lying around unsupervised, the servants might be tempted to steal them and this is more of your fault than theirs. This is because coming from a poor background, they will obviously be tempted when they see something precious left unchecked. And since Islam has always taught us to take precautions, it is indeed our responsibility to look after our things. Learning about Islam and the ways of the prophets always helps us improve ourselves as not just Muslims but also as humans. This is why we have compiled a list of the Top 15 Islamic Books Every Muslim Should Read in 2020.

Akhlaq in Islam has great value. It sums up the good conduct and manners of a person. In Allah’s eyes, riches and wealth have no place but the person with good character or Akhlaq is loved by Him. Islam stresses upon having good conduct and character as it can win over hearts. Speaking gently and compassionately is part of a good character. Our domestic staff and labor need compassion too. Having them as our helpers doesn’t mean we have power over them. We should speak gently to them and not in a harsh manner. Talking in an unpleasant tone can be hurtful for them and it angers Allah SWT.

The only provider and giver are Allah SWT and He provides us with every blessing. Food is one of His blessings and those who have been provided by Allah SWT should share their food with his servants, domestic staff and labor. We should always give what we eat and what we drink. When one of them cooks for us, we should ask them to sit with us and eat at the same table. These days we see a lot of people go to the restaurants with their servants, and then make them sit on a separate table while they enjoy the food themselves. This is an incredibly selfish and unethical act and it does not reflect a true Muslim. 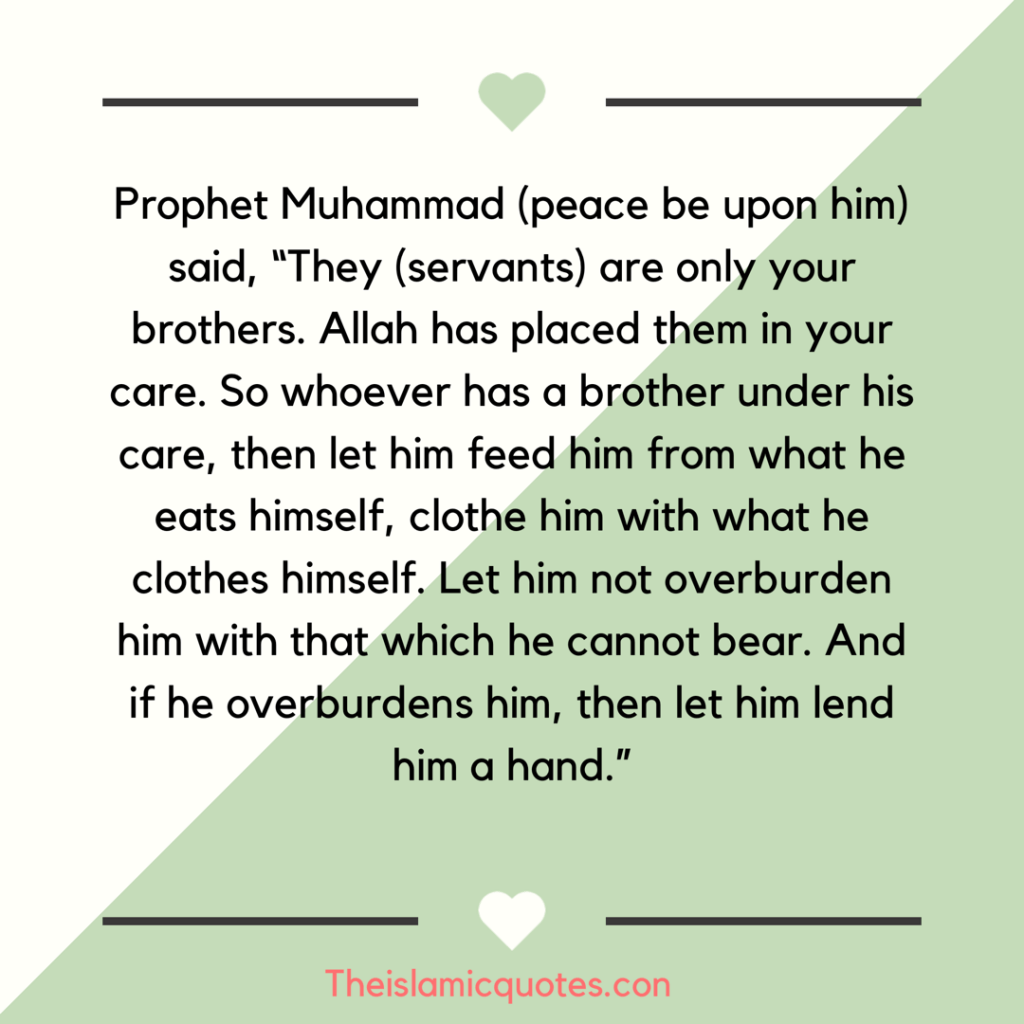 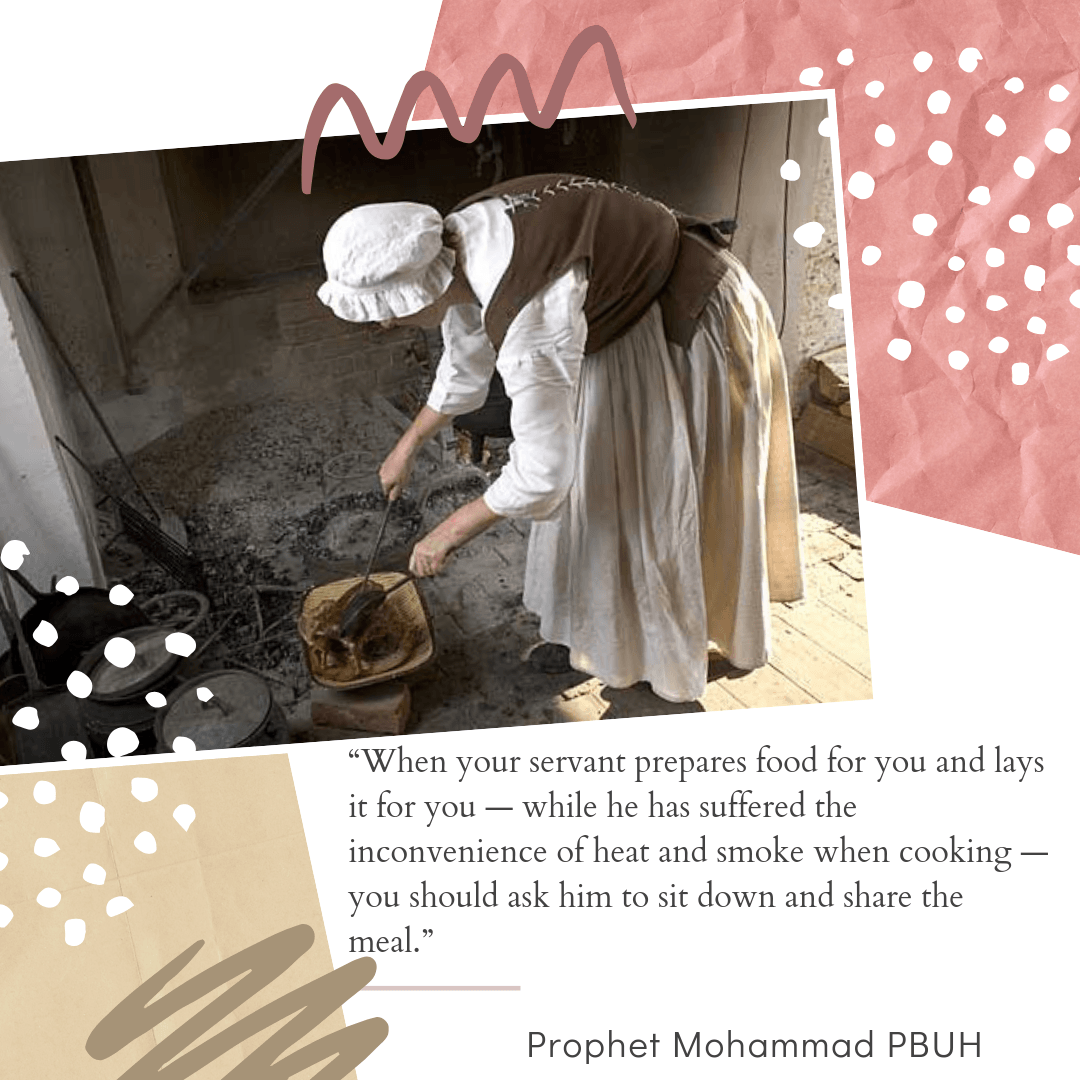 ↓ 10 – Provide Them With Good Clothing

Clothing is one of the most important and basic needs of a human. It is fardh on us to provide clothing for the domestic staff and house help if they don’t have enough clothes to wear. They work for us and our Prophet Muhammad himself said that we should give clothes what we wear. Taking care of their needs is necessary for us and we should never neglect their needs and problems. 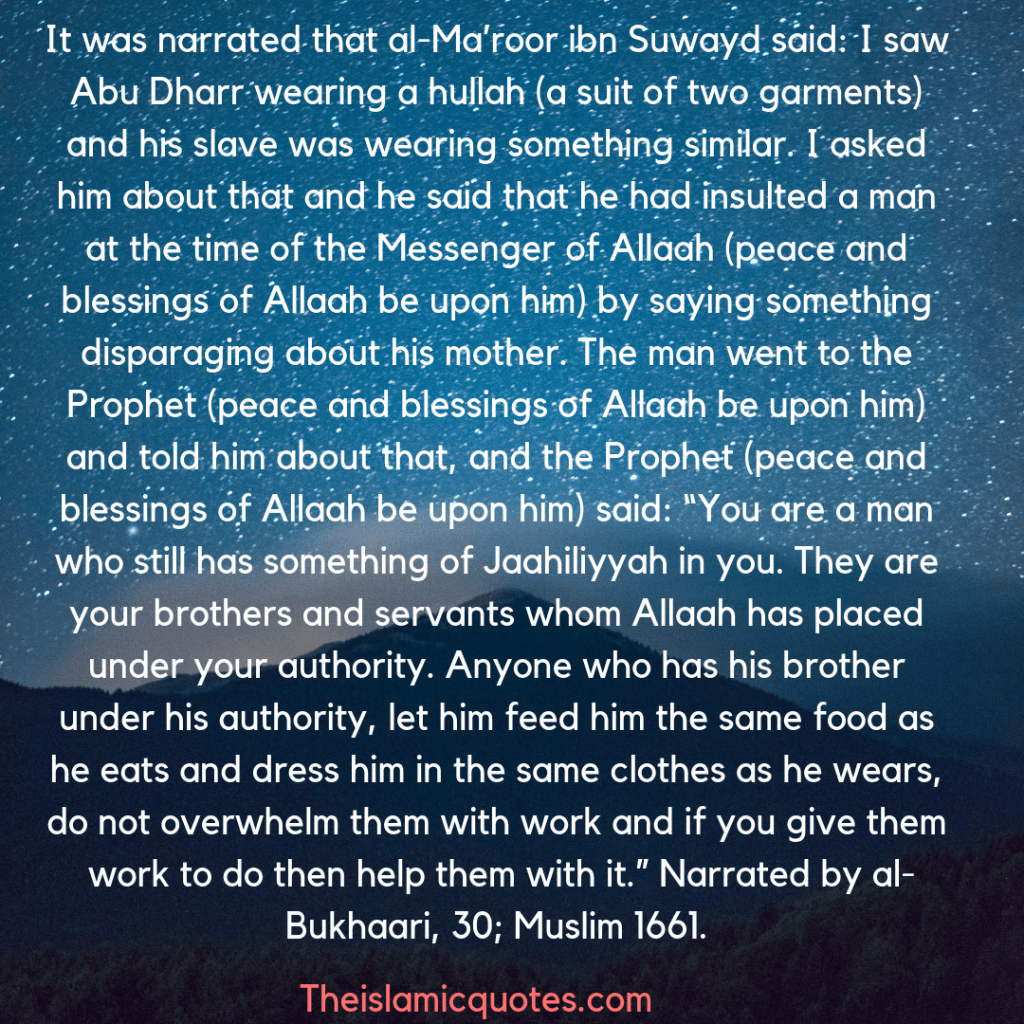 Domestic staff and house help are the most deserving of our financial help. One could help them in the name of Sadaqah and can give them Zakat to help them in difficult times. Allah has asked his people to pay Zakat to those who are financially not strong and Mustahiq. When they work for us, their problems become ours so we should never hesitate or step back in helping them.

↓ 8 – Treat Them With Kindness

Kindness and compassion in Islam have been given great value. Being kind with creatures of Allah SWT is encouraged in Islam and is loved by Allah SWT. The life of our Prophet Muhammad PBUH is a beautiful example of kindness and compassion. He would never utter words that could harm a human being. Similarly, our helpers and workers are our brothers and we should treat with kindness and compassion. We should be an empath and understand their problems and never treat them in a cruel manner. Our prophet never said anything rude or harsh do Anas(RA).

The domestic staff works hard and with great effort and for this they deserve a good amount of money. They earn for their family and they should be given the right and deserved amount for their efforts and work. Delayed and unjust payments or wages is the punishable act in front of Allah’s eyes. Those who can afford and still don’t pay to his workers according to their efforts or work or delay their payments will be questioned on the day of judgment. Our Prophet Muhammad PBUH asked to give wages to labors and workers before their sweat dries. 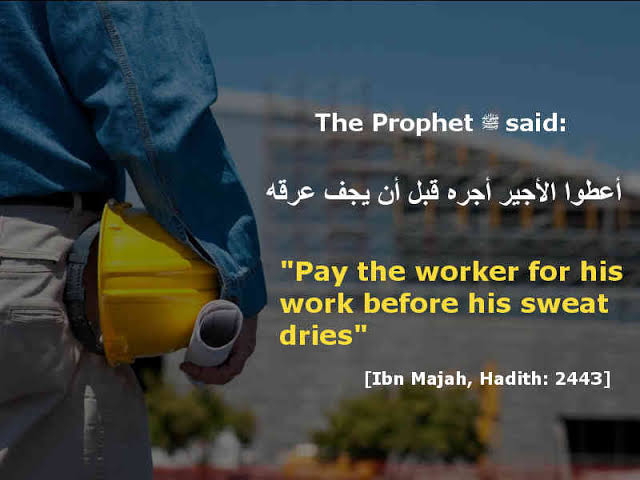 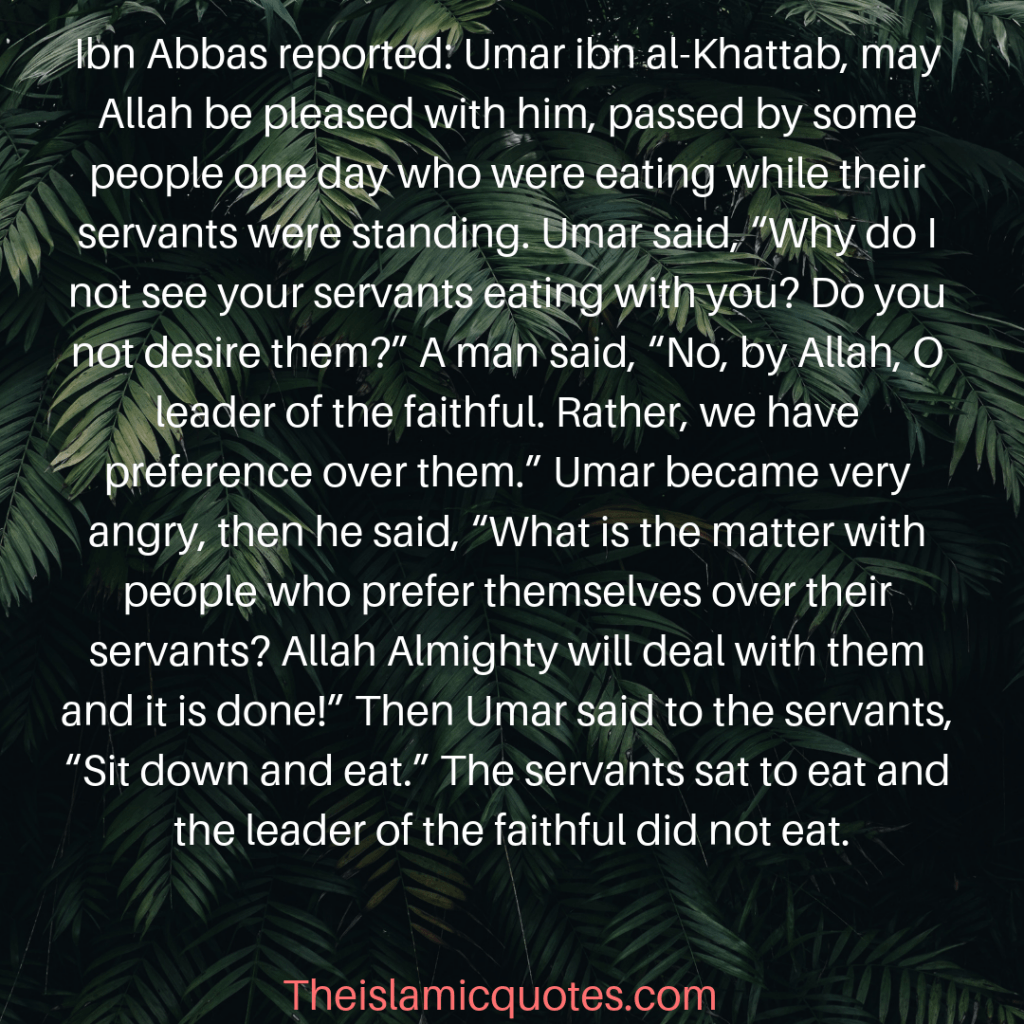 ↓ 5 – Remember That They’re Your Equal In Allah’s Eyes

Equality in Islam is also one of the main qualities. Equality means to consider everyone equal. Allah SWT has never discriminated amongst His creatures as everyone is equal in His eyes. No status of servant, worker, rich man or labor means yo Him and we have no authority over each other. Our domestic servants are not our slaves, they’re our brothers and we should treat them equally just as we treat any other man of high status. This was something that the Prophet Mohammad stressed on throughout his life and even in his last sermon so you can realize how important it must be, you should also give a read to some more amazing Quotes From The Last Sermon Of Prophet Muhammad (SAW).

Forgiveness is loved by Allah SWT. He forgives us when we make Tauba and blesses us in many ways. We human beings should forgive each other for the sake of Allah SWT, no matter how much hurt they’ve caused us. Similarly, our brother helpers and workers can hurt us or do things that cause us distress. We should forgive them wholeheartedly as Allah loves the forgiver. 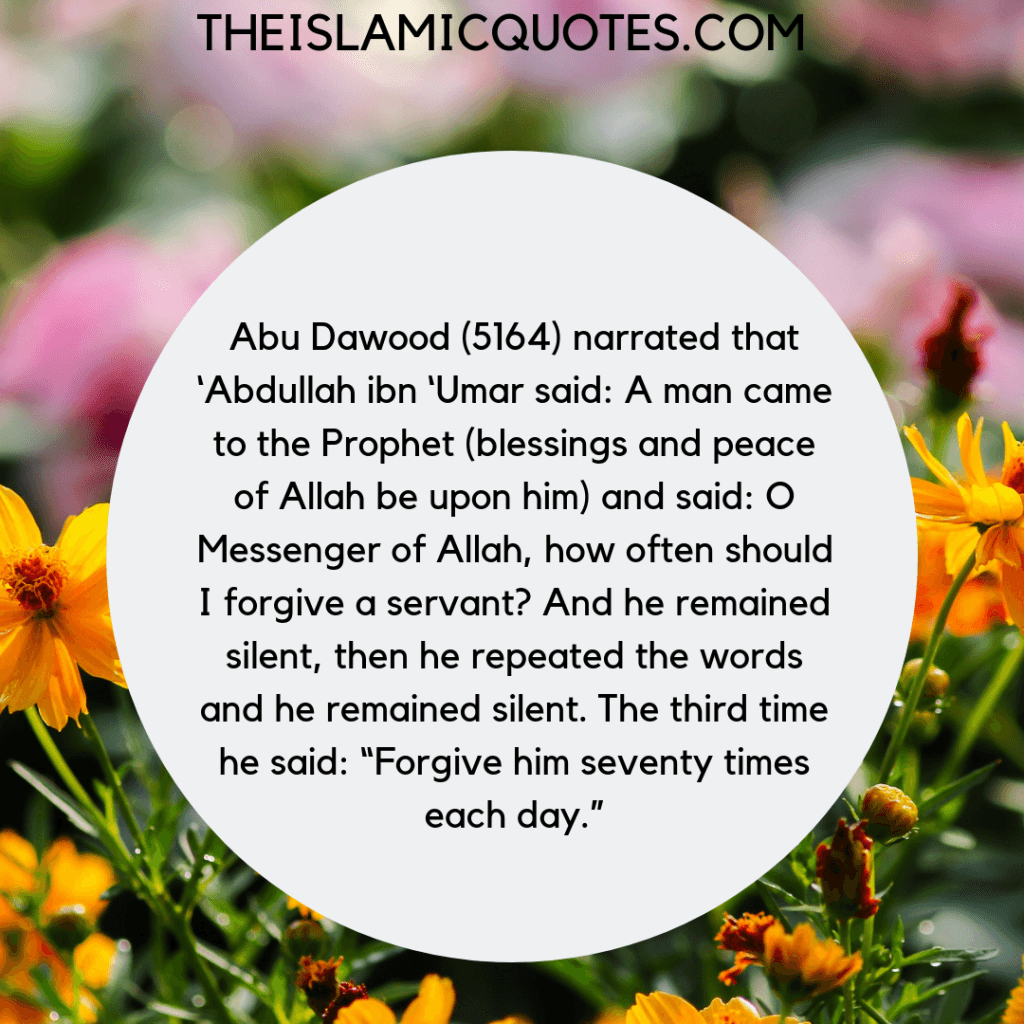 Respect is the basic right of every human being. All of them should be respected either he’s a clerk or a rich man. A worker or a servant deserves equal respect as any other businessman does. The employer should always respect his workers and domestic help. Islam encourages us to pay respect and be kind to our brothers. 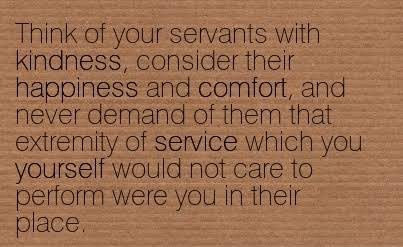 Domestic help and workers help us in many ways. Working for someone doesn’t mean they lost their dignity to the employer. They’re humans and Islam discourages treating servants harshly and brutally. There’s no place for beating up a servant or a worker. Prophet Muhammad PBUH has strictly forbidden to lay a hand our servants even if they hurt us. 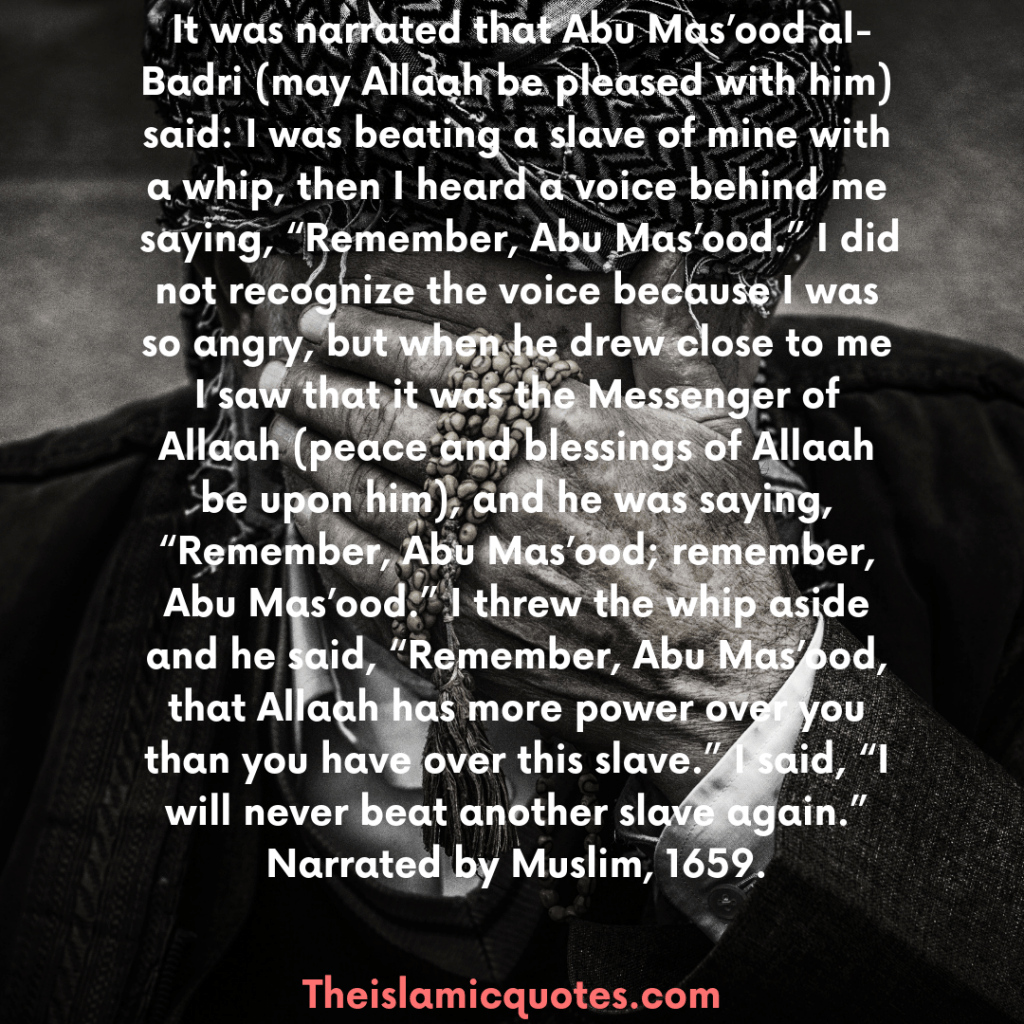 ↓ 1 – Don’t Treat Them As Your Inferiors

Allah SWT is the Superior of all and every creature is His servant. No human beings have superiority over another for any status or race. Our domestic workers and helpers are our brothers and they’re not inferior in any form. We have no right to feel superior or insult then thinking they’re inferior to us. Prophet Muhammad PBUH in his last sermon clearly mentioned that no human being has superiority over another in any case. 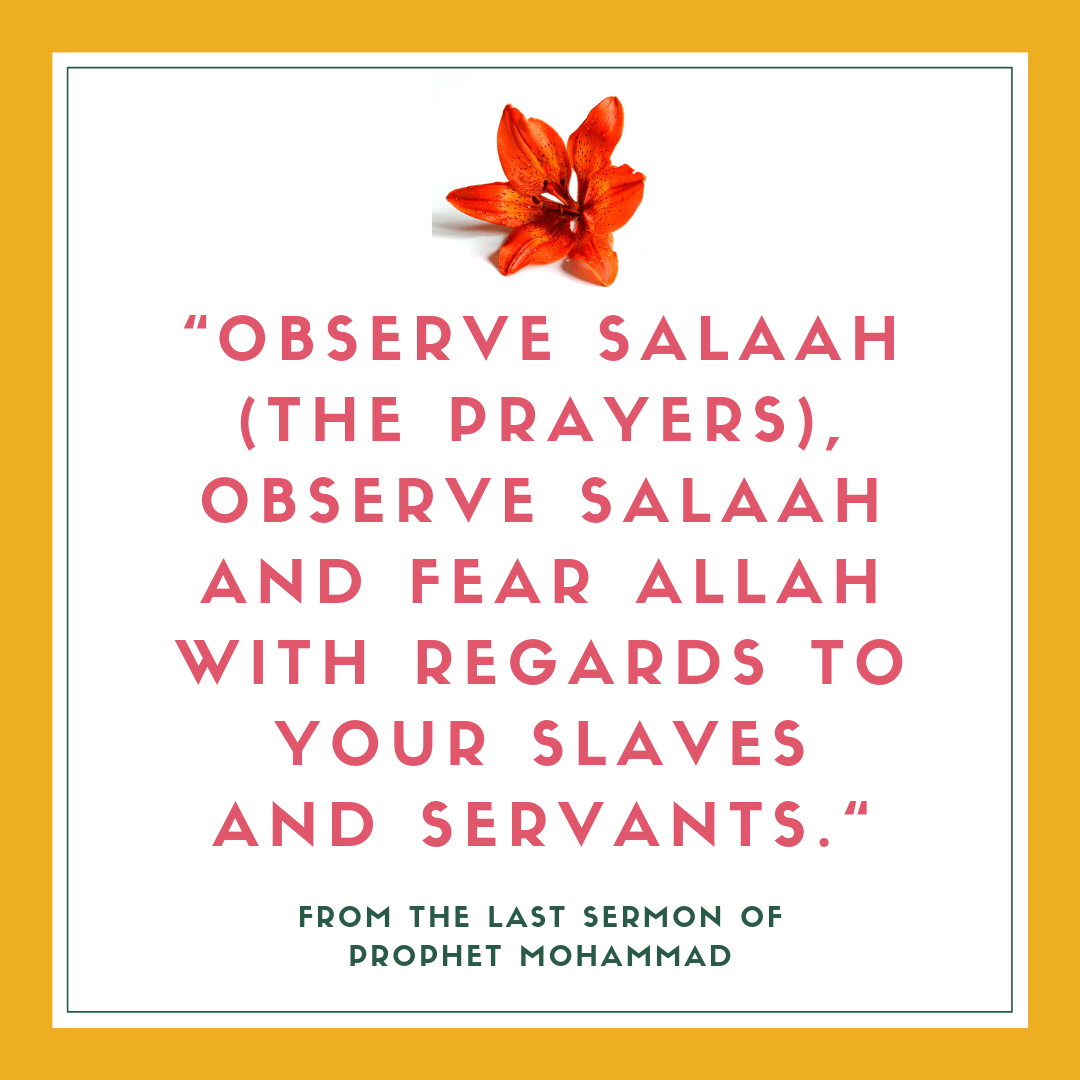 In conclusion, it is important for us all to realize that we have been created in different classes only by Allah’s choice and not because we deserved it. If Allah has blessed you with upper-class status, respect his blessing and do not misuse it. 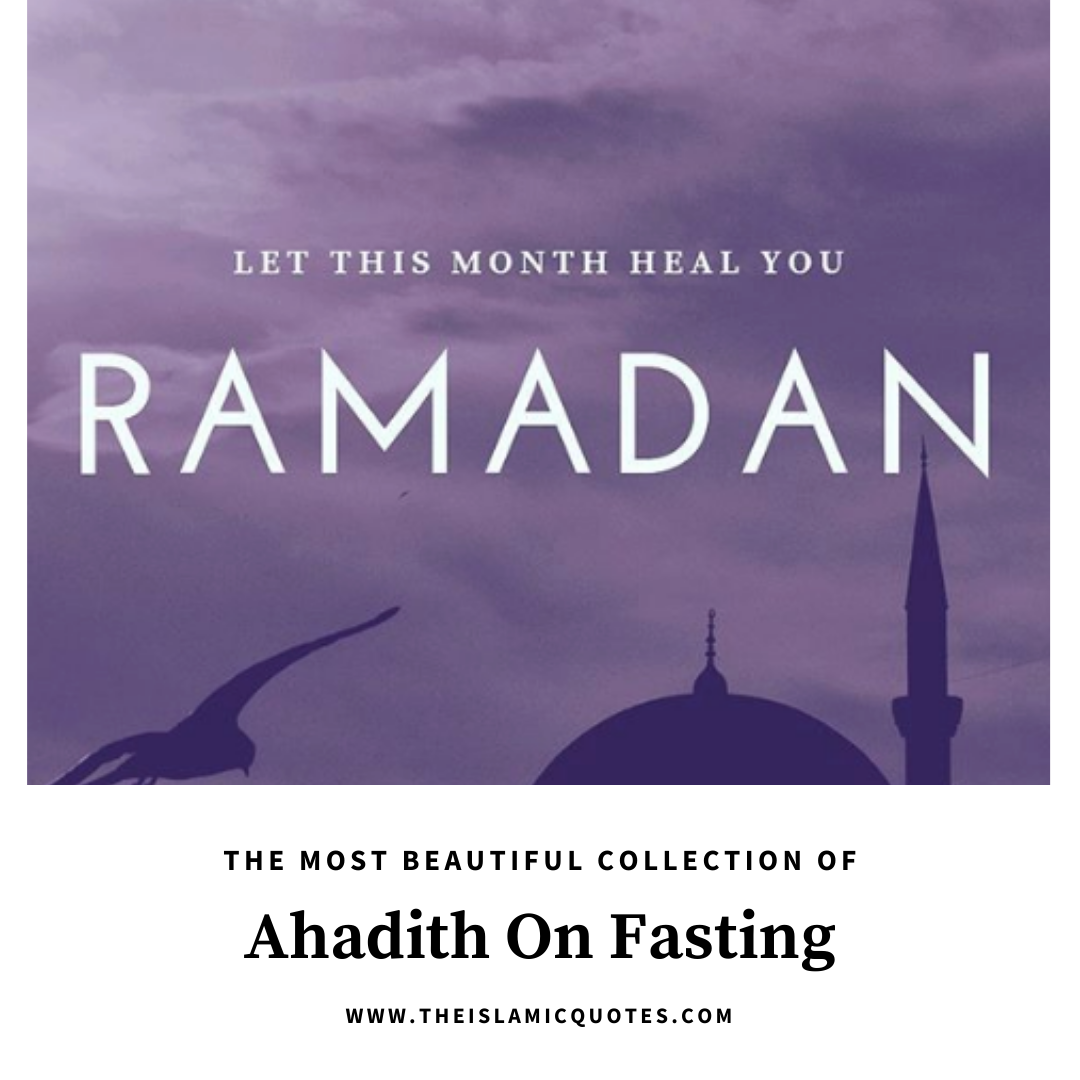 Hadith On Fasting – 19 Most Beautiful Ahadith About Ramadan 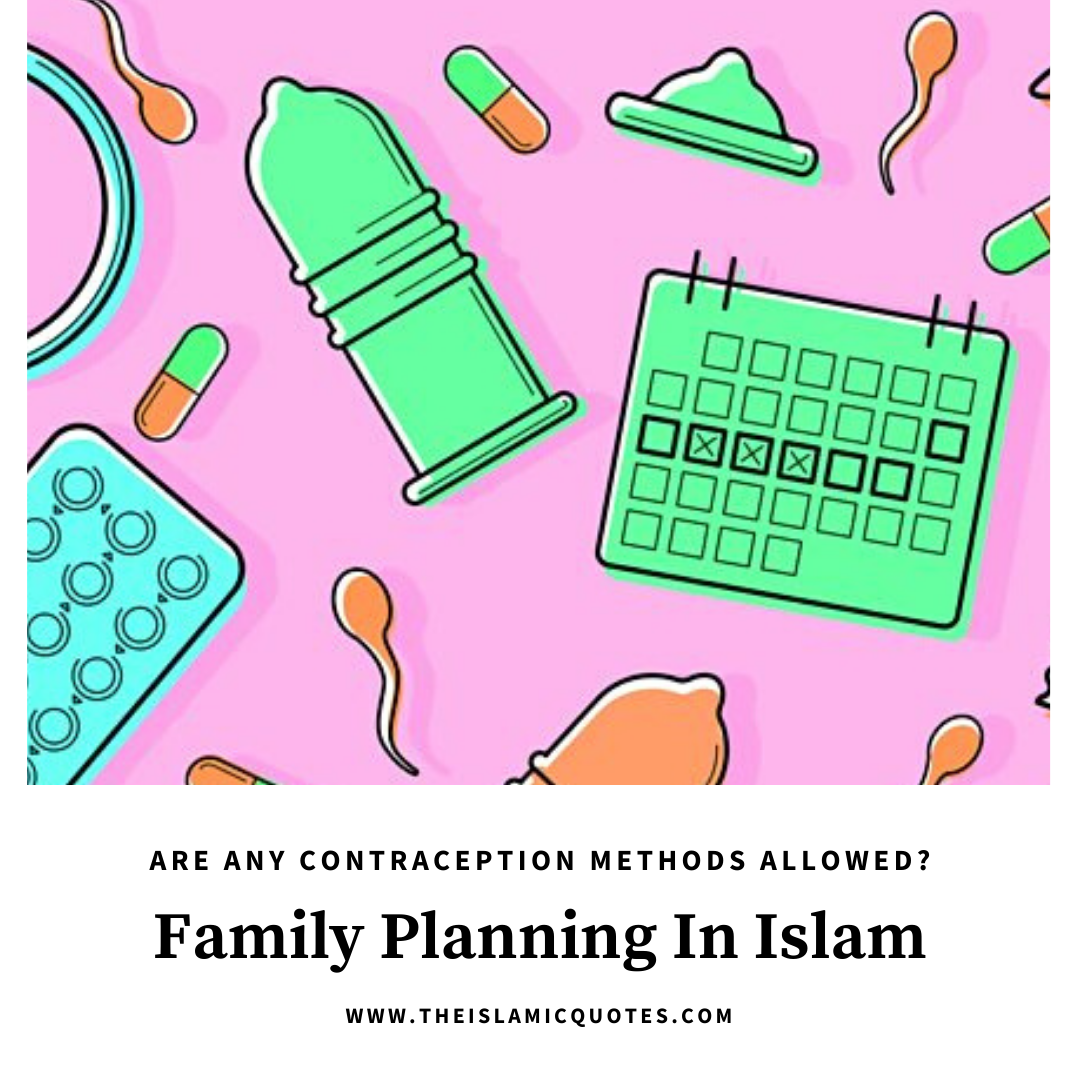 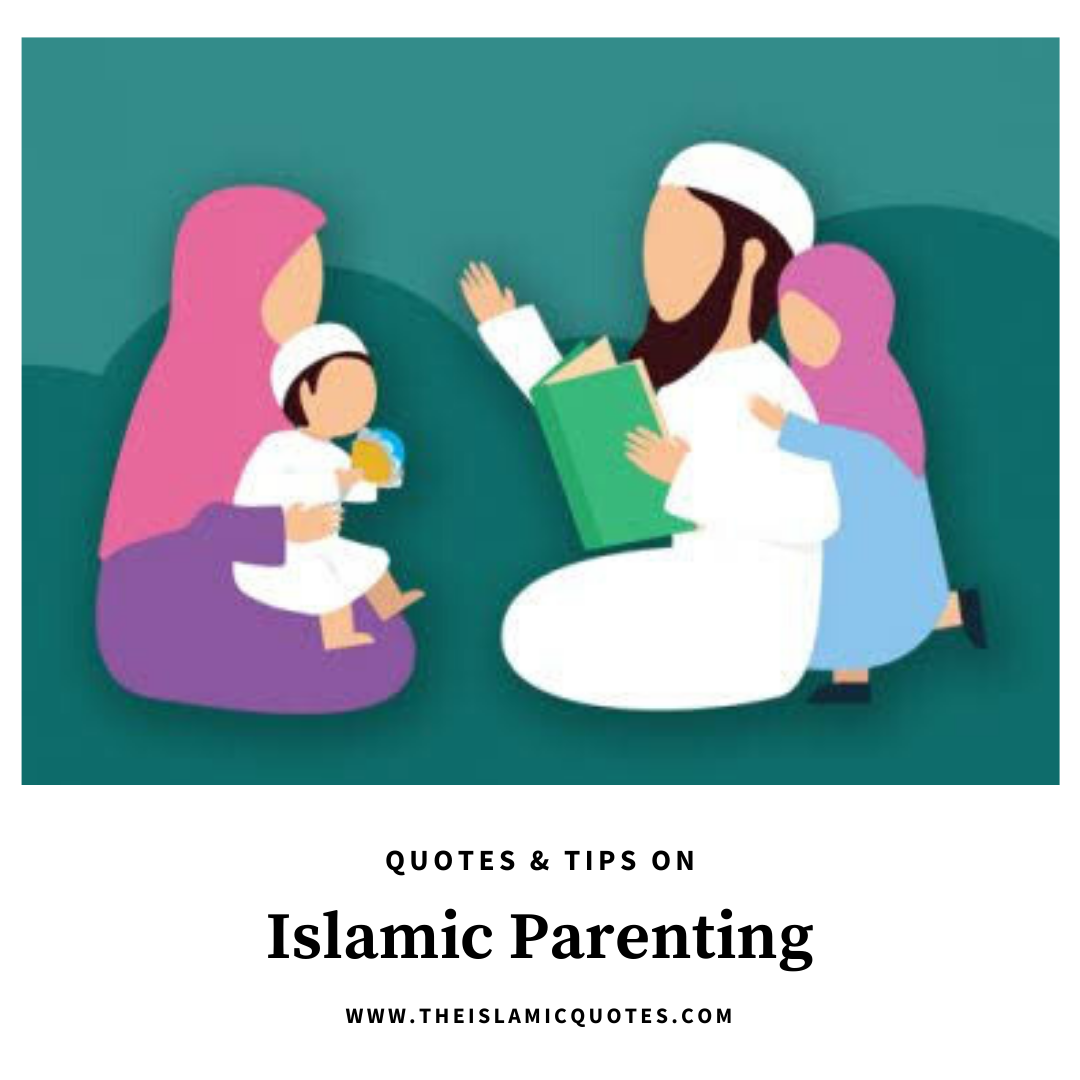 15 Islamic Parenting Tips & Quotes On How To Raise Children 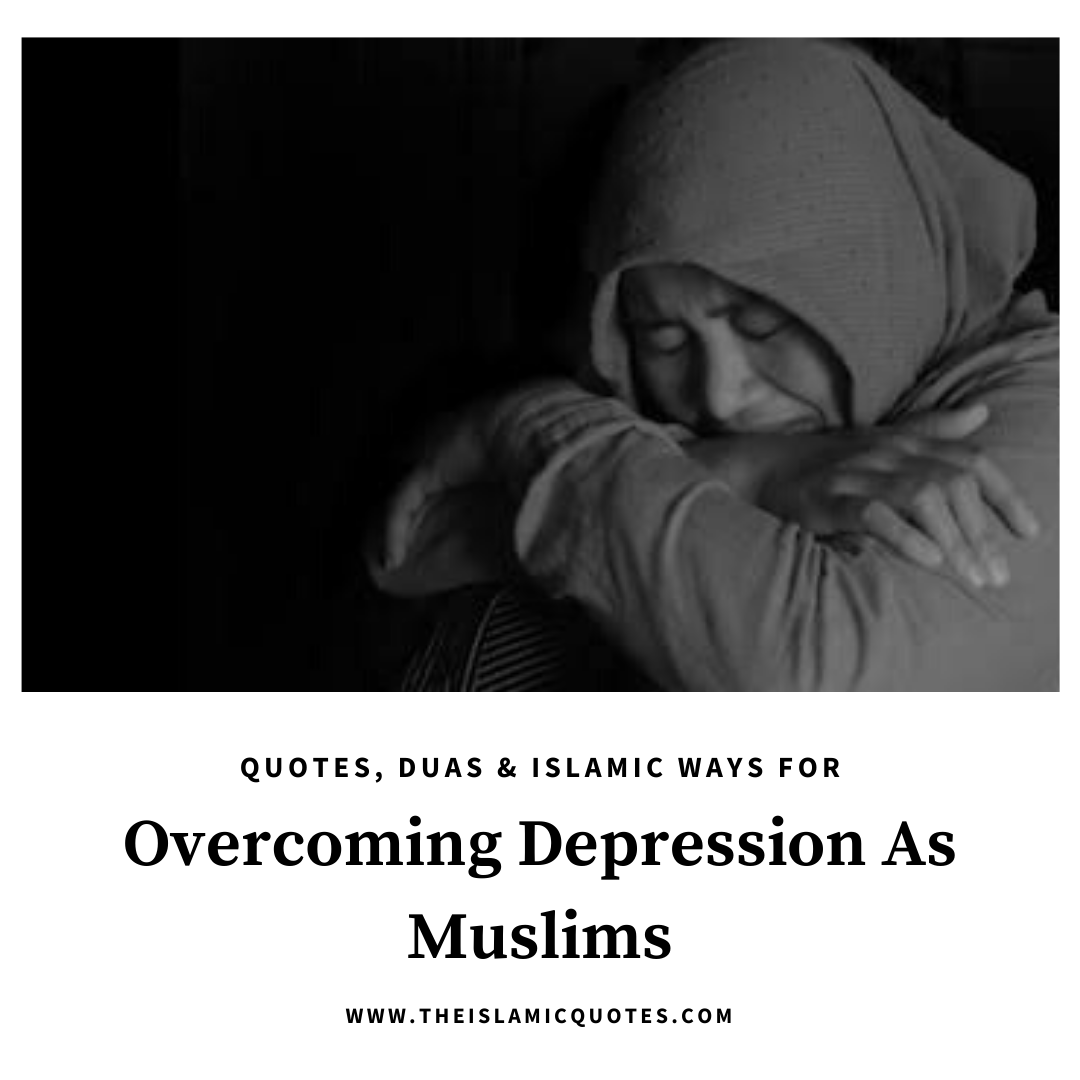